LAKE ORTA: FROM PETTENASCO TO LEGRO

An easy lake front route that partly follows the “Raggio d’Oro” (Golden Ray) one and leads from the village of Pettenasco to Legro, a “painted village“, through the fascinating historic hamlet of Miasino.

Even though it is possible to get to the Paganetto picnic area by car, we recommend that you park near the church or lakeside promenade, if possible, so that you can walk through the village of Pettenasco and admire the beautiful 11th century Romanesque bell tower, one of the oldest on the Riviera. From the church, cross the state road to take Via Vittorio Veneto (be careful, there is no pavement/sidewalk), which leads uphill first to the Museum of the Art of Wood Turning (“Museo dell’Arte della Tornitura del Legno”) and then to the intersection with a small chapel (water fountain).

Wood turning was a typical type of craftsmanship in the Cusio area. There were many businesses producing objects in turned wood until the Fifties. The museum contains a collection of tools, machinery and objects from local factories and workshops.

Just after taking the road on the right (brown “Paganetto picnic area” sign) go under the high railway bridge (while you pass underneath, try making noise and listen to the echo!). Stay on the asphalt road, and you’ll come to the picnic area, right before an old bridge covered with ivy. A short detour takes you up the stairs to the left and leads to the base of the bridge, near the bank of the stream, with an old fountain and a statue of the Blessed Virgin. Just after the bridge, you need to take the dirt road on the right (VU9 sign for Carcegna-Miasino) which climbs gradually until it touches the railway line. Continuing on after this point, some cobblestone sections become visible. When you come to a gate, the road bends decisively to the left and proceeds uphill more sharply until it joins a wider dirt road that continues to the right, now more gradual. You enter between the houses of Carcegna along Via Roma. Stay on Via Roma and ignore the signs of various colours. Shortly, you will come to a crossroads near the Church of San Pietro Apostolo. Cross the intersection to reach the church. There is a small playground behind it. Then, follow a short stretch of asphalt road and almost immediately go left (sign for “Miasino-Legro”). After a building that houses the workers’ club you have to watch the path carefully and go right on the smaller grassy road (Be careful! If you go straight, you will enter a private property!) that crosses a meadow and then gets to a bridge over a small stream. Then, you’ll climb a staircase. Once at the top, take the dirt road to the left, which after a short while becomes asphalted. This road is always angled slightly uphill. From this point, go straight on. To the right, there is a view of the lake and the Orta San Giulio peninsula. This way you can reach the village of Miasino by entering under an archway that leads to the cobbled streets.

Variant: the route continues to the right, but we recommend a detour to the left through the village streets. You will pass Villa Nigra, a marvellous aristocratic country manor with wings built in various periods, from the 16th to the 18th centuries. Now under municipal management, it hosts events, exhibitions and concerts. From here, follow the signs for the Church of San Rocco, a magnificent building situated slightly higher than the village. Grassy “steps” lead up to the church (benches and water fountain). This is the highest point of the entire route. In the immediate vicinity, you’ll find the “Giardino dei Semplici”, a sort of botanical garden with a collection of plants mentioned in the Bible, and just behind the bell tower, there is a football pitch and a volleyball court.

From the fork in the road, continue on the cobblestone street until you reach an intersection. You have to turn right along a stretch of asphalt (be careful, there is no pavement/sidewalk!). After 300 metres, take a dirt road on the right (sign for “Legro-Orta”) which leads down through a wooded stretch. The dirt road becomes asphalt and at its end, you turn left. Go through the intersection, and head towards the two gates in front of you: between the two is where Via Vecchia Stazione begins, and you will see the first film-themed murals. You have arrived in the town of Legro, known as “the painted village” because there are many murals throughout the town on the façades of the houses and through the streets. All of them depict films shot on Lake Orta, and you should wander through the village to see them.

There are various ways to return to the starting point.
You can simply go back they way you came.
You can take the Novara-Domodossola line train from the Orta-Miasino railway station (which is actually in Legro!).
Finally, we really recommend walking on to Orta San Giulio (see the description below) and, from there, returning to Pettenasco with the boat that travels towards Omegna (not during winter).

Towards Orta San Giulio
Difference in altitude: -100 meters downhill one way
Distance: 2 km one way
Walking time not counting stops: 45 minutes one way
When you get to the rail road, cross through the underpass and go towards the sport facilities. Continue on the trail to Via Marconi, near the roundabout where the impressive Villa Crespi is located.

If for some reason it is not possible to take this path, just walk with the railway line to your right until you pass the station and reach Via Marconi. Here, go left and descend to the roundabout mentioned above, or take the smaller street Via Don Giovanni Bosco that runs parallel to this street and has no traffic.

At the roundabout, Villa Crespi appears in all of its splendour. Today, it houses a luxury hotel and a restaurant owned by a famous Italian chef. You are now in Orta San Giulio, one of the most beautiful villages in Italy – “Borghi più belli d’Italia” (www.borghipiubelliditalia.it). Turn right alongside the villa and take Via Fava, which will quickly lead to the lake shore and end in Piazza Mario Motta, where there are several businesses and the boat landing stage. At one end there is an interesting frescoed building with a staircase: the “Palazzo della Comunità”. Built in 1582, it was the government seat of the feudal state of the “Riviera di San Giulio”, and is now also known as “Broletto” or “Palazzotto”. Orta unfolds in a maze of intricate streets, which are only apparently chaotic. Just stay on Via Olina, which continues behind the Palazzo della Comunità, to explore the town’s most typical alleys and gardens, or start walking up Via Caire Albertoletti, also known as the “salita della Motta”, to admire some of the oldest buildings. Casa Marangoni (14th century), for example, is also called “Casa dei Nani” because of the small windows that adorn its upper part, supported by a long wooden lintel and decorated with frescoes.

a special visit
Several boats sail from Orta to the Island of San Giulio, which is certainly worth a visit. Its narrow alleys, staircases and stone arches create a truly evocative setting. Most of its buildings were erected on the remains of an ancient castle, perhaps of Longobard construction, but the most spectacular is certainly the Basilica of San Giulio, with its pure Romanesque style exterior. The original church was built in the 4th century, apparently by the saint in person. It was rebuilt for the first time in the 9th century, and then underwent further changes during the 10th and 11th centuries. Inside, visitors can see a fine stone pulpit in Oira serpentine stone (12th century), with interesting bas-reliefs including a mysterious human figure. According to tradition, it is Guglielmo di Volpiano (962-1031), a Benedictine monk and abbot of Dijon, who was born here on the island. Other significant artwork includes the frescos, done from the 14th to the 16th centuries, some by students of the painter and sculptor Gaudenzio Ferrari (1475/80-1546). Inside the sacristy is a fossil vertebra, which is presumed to have been discovered in a cave on the Orta peninsula. Could it be the remains of one of the dragons that San Giulio banished? Another very important building is the Mater Ecclesiae Abbey. Since 1973, a large group of Benedictine cloistered nuns has lived there and dedicated their time to restoring precious fabrics and tapestries.

This hike can be done by (almost) everyone but it is not accessible to pushchairs. If you can, continue walking to Orta. Children will appreciate a nice ice cream while resting on the shores of the lake! 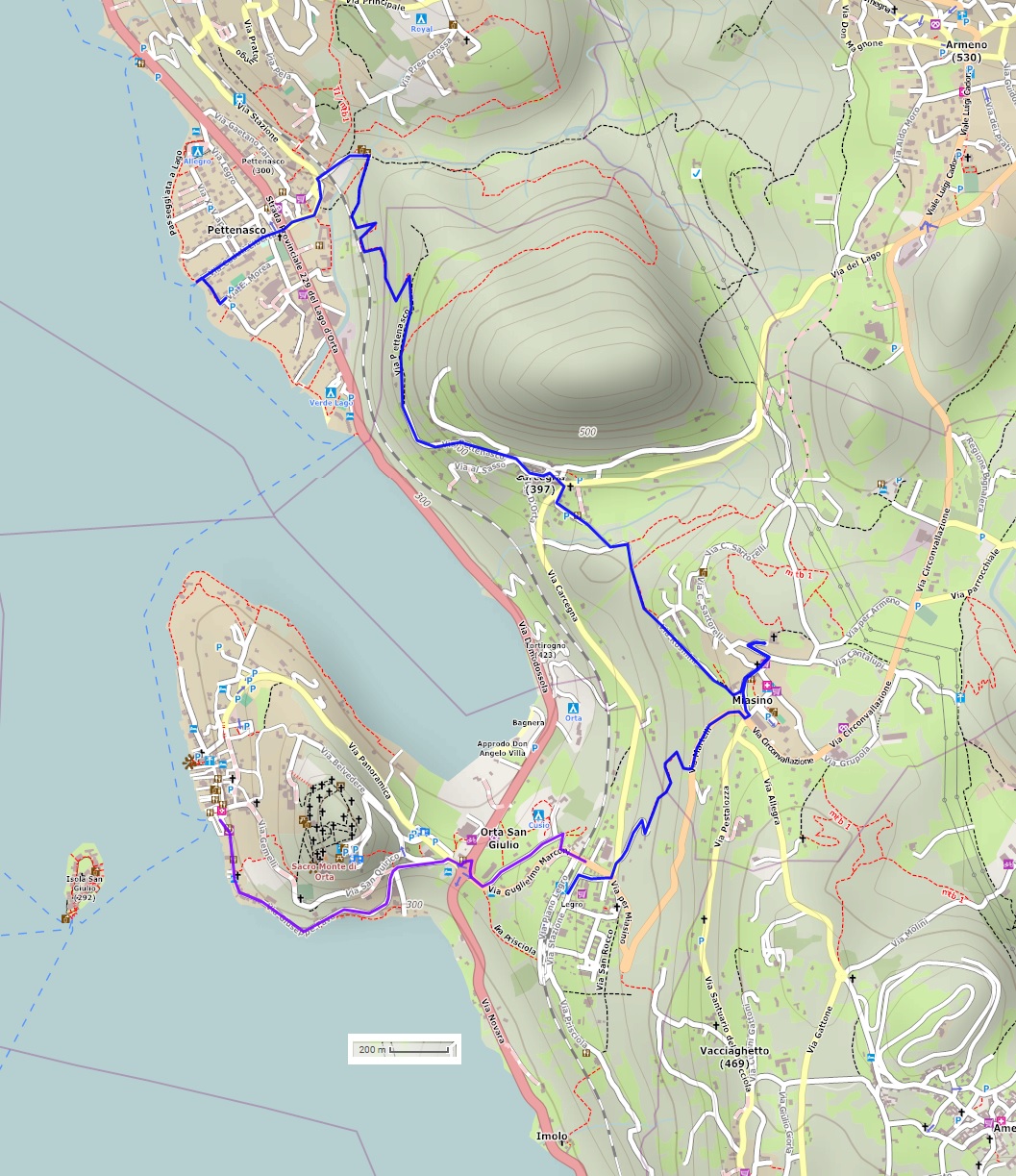 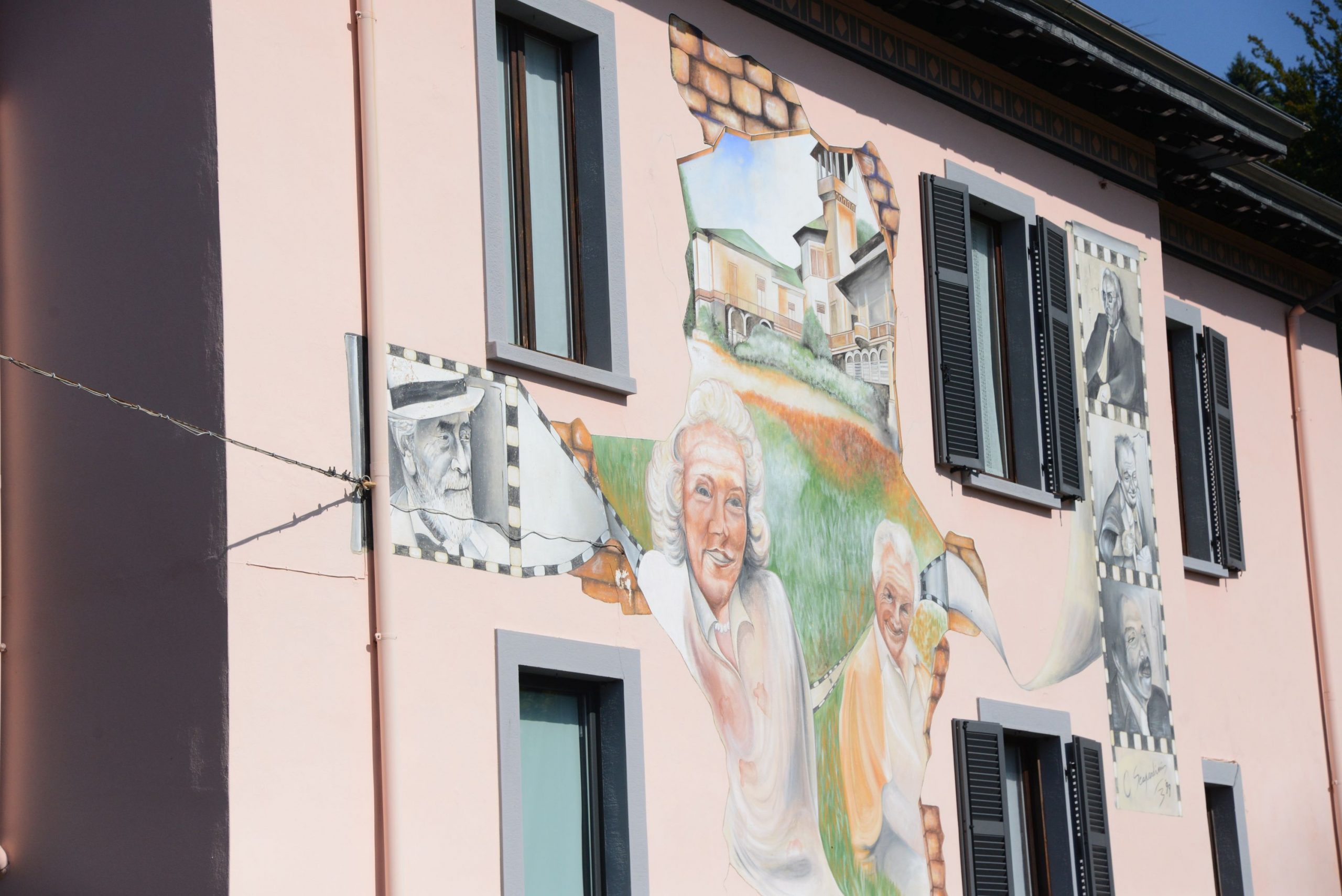 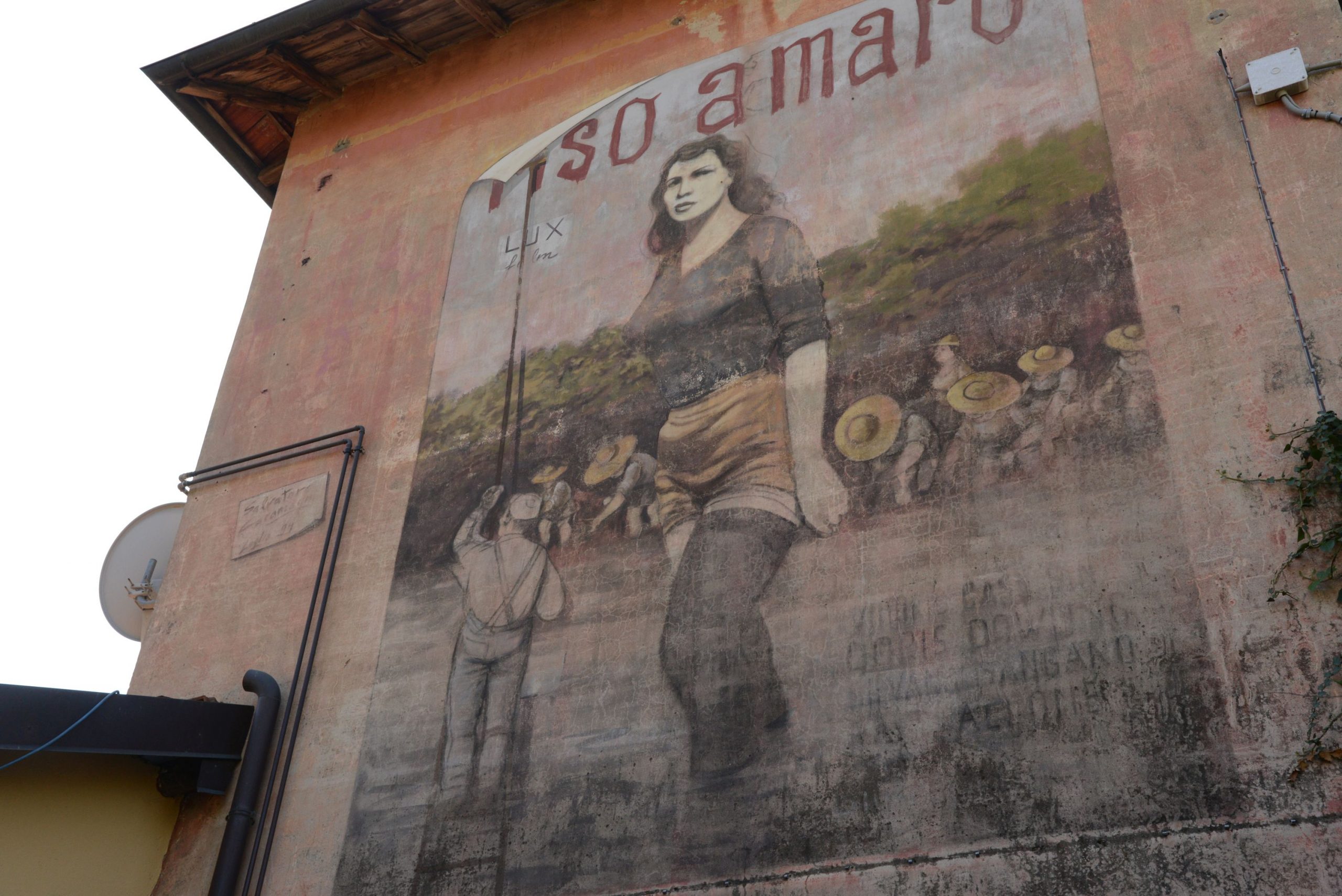 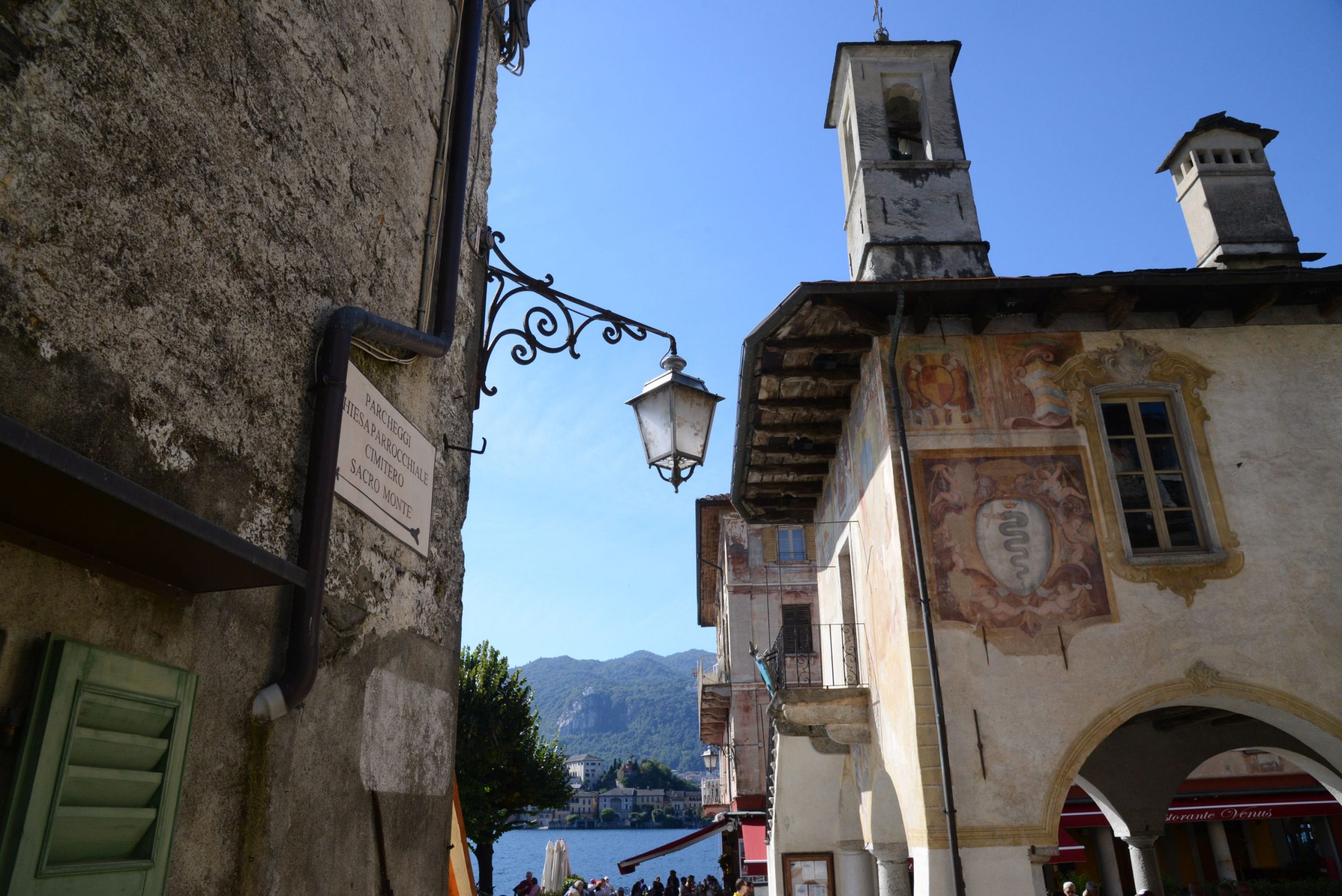 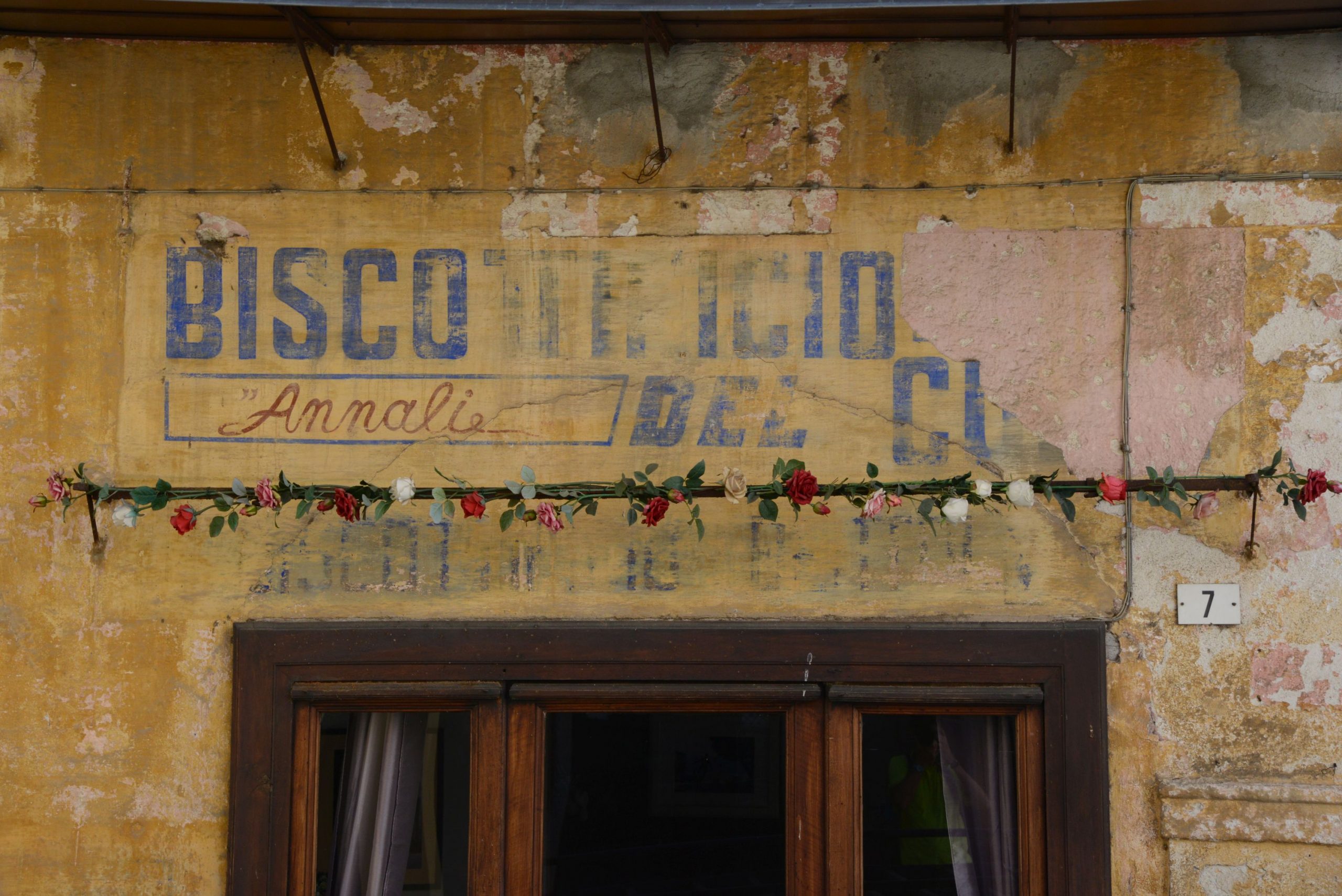 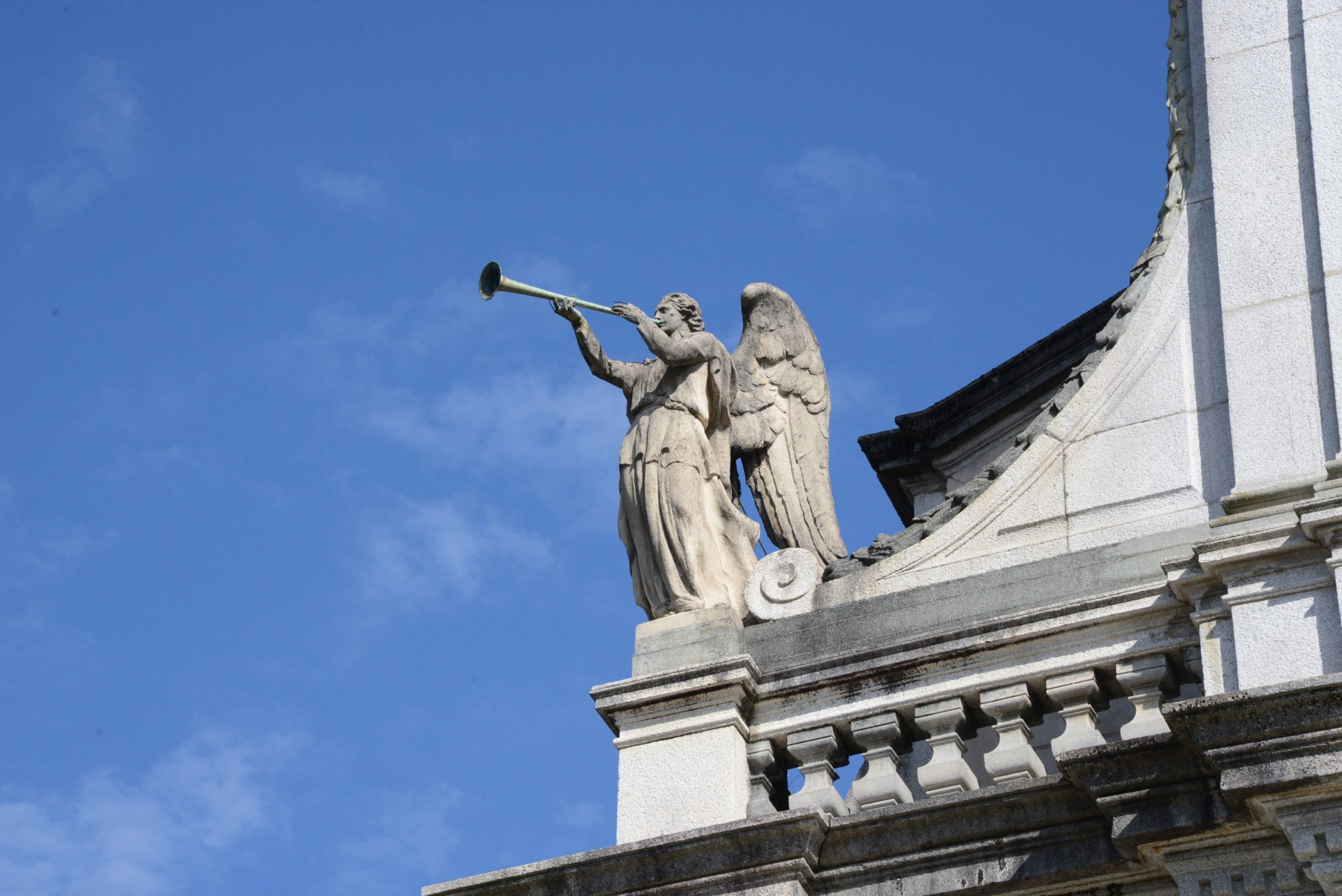 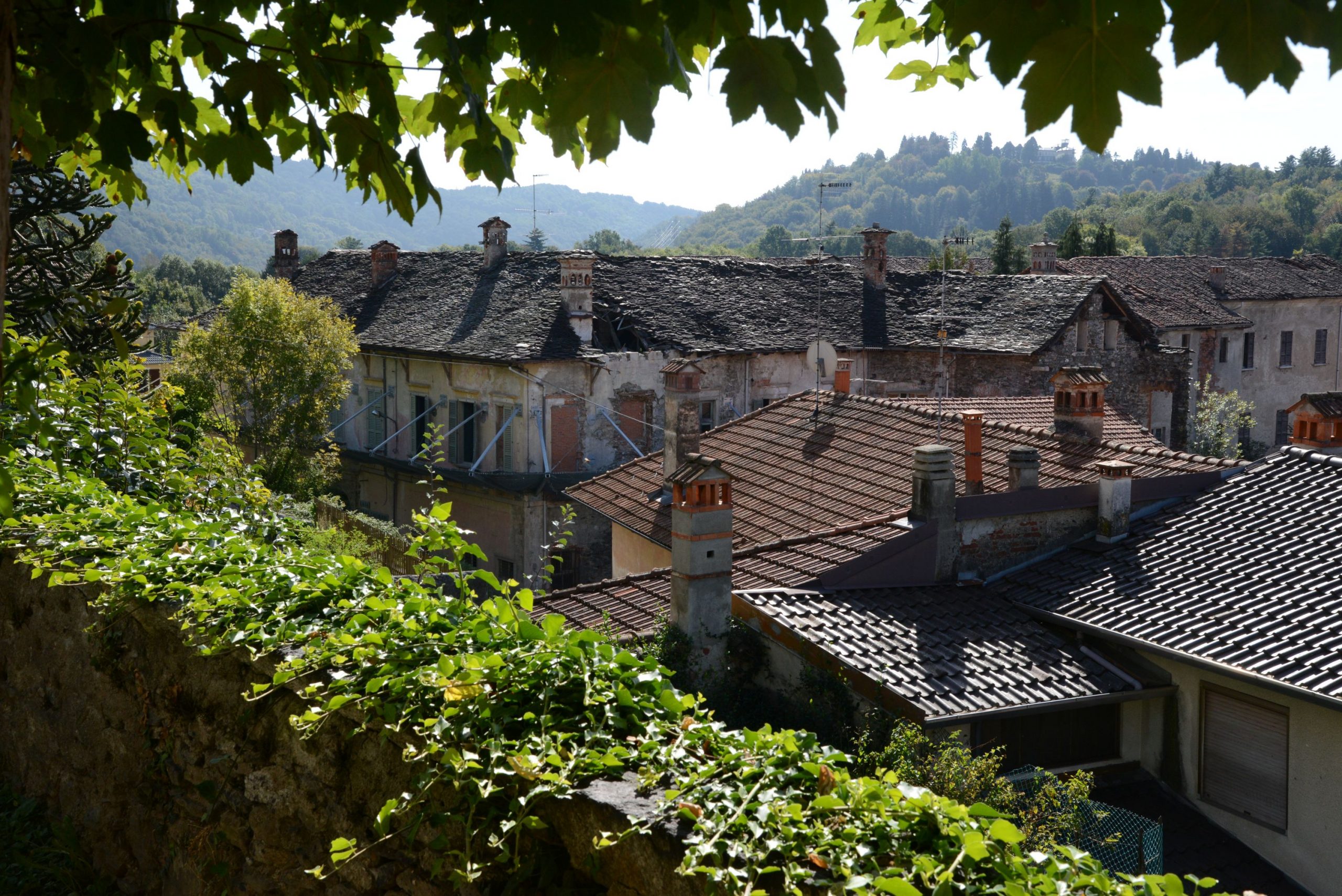 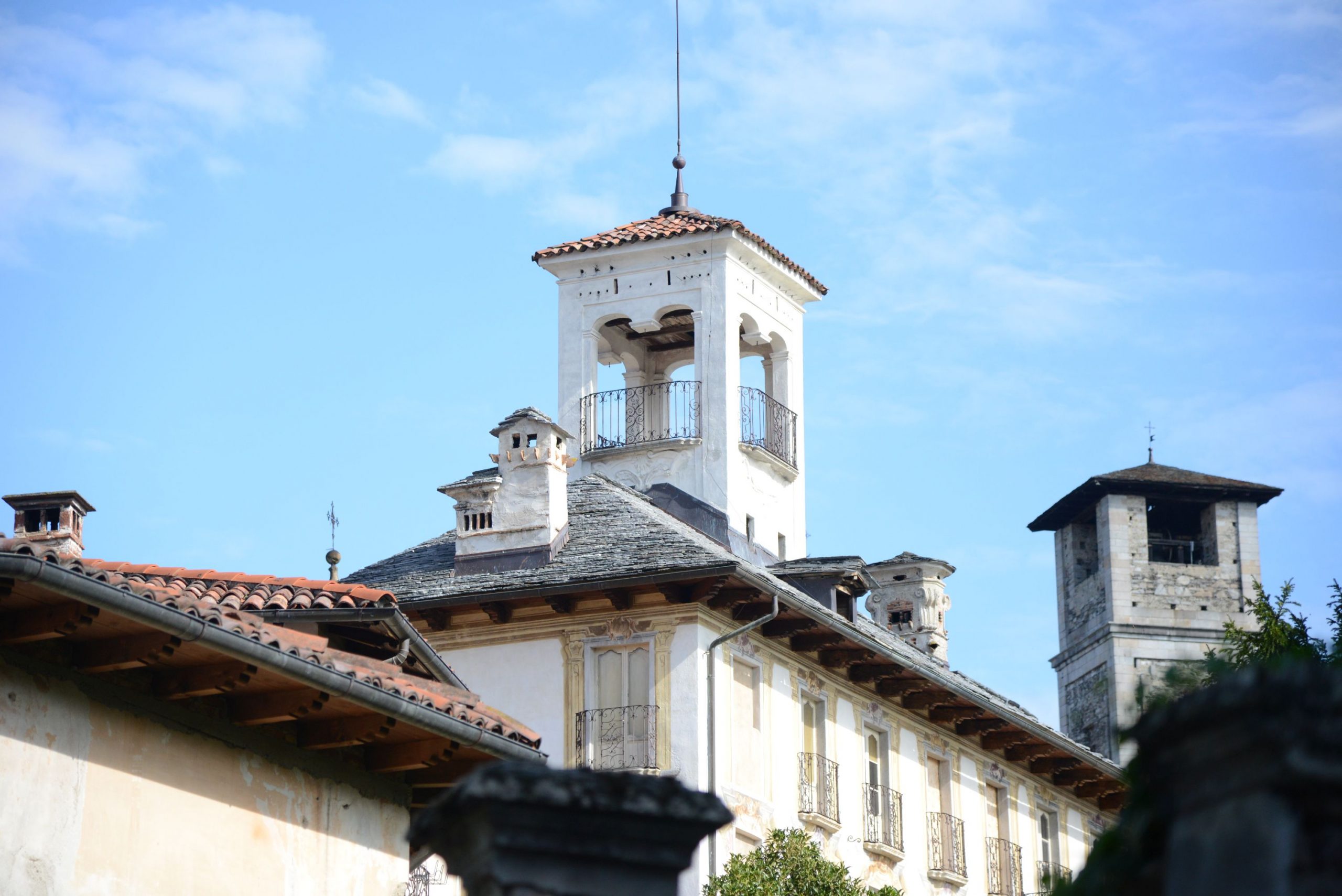 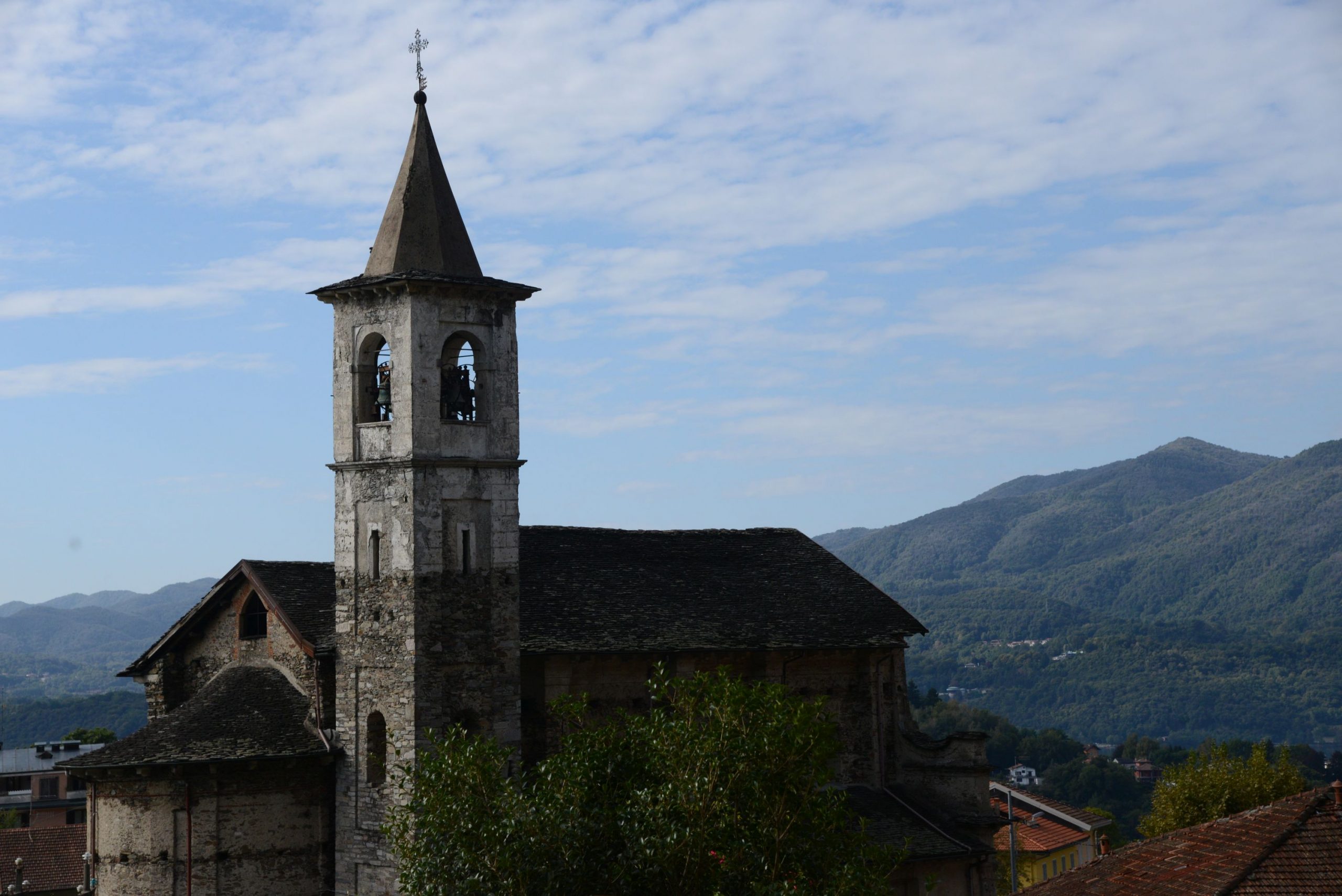 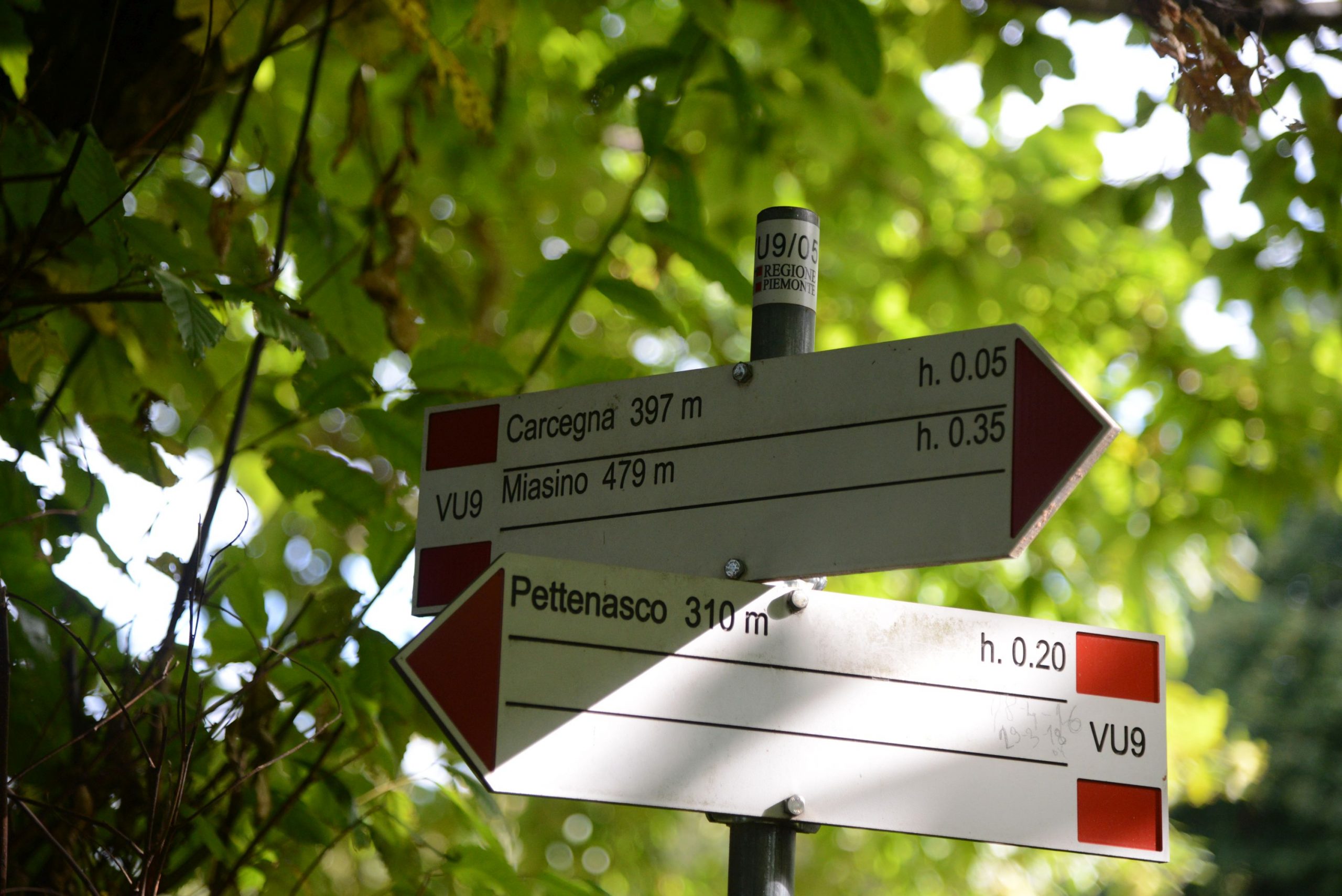 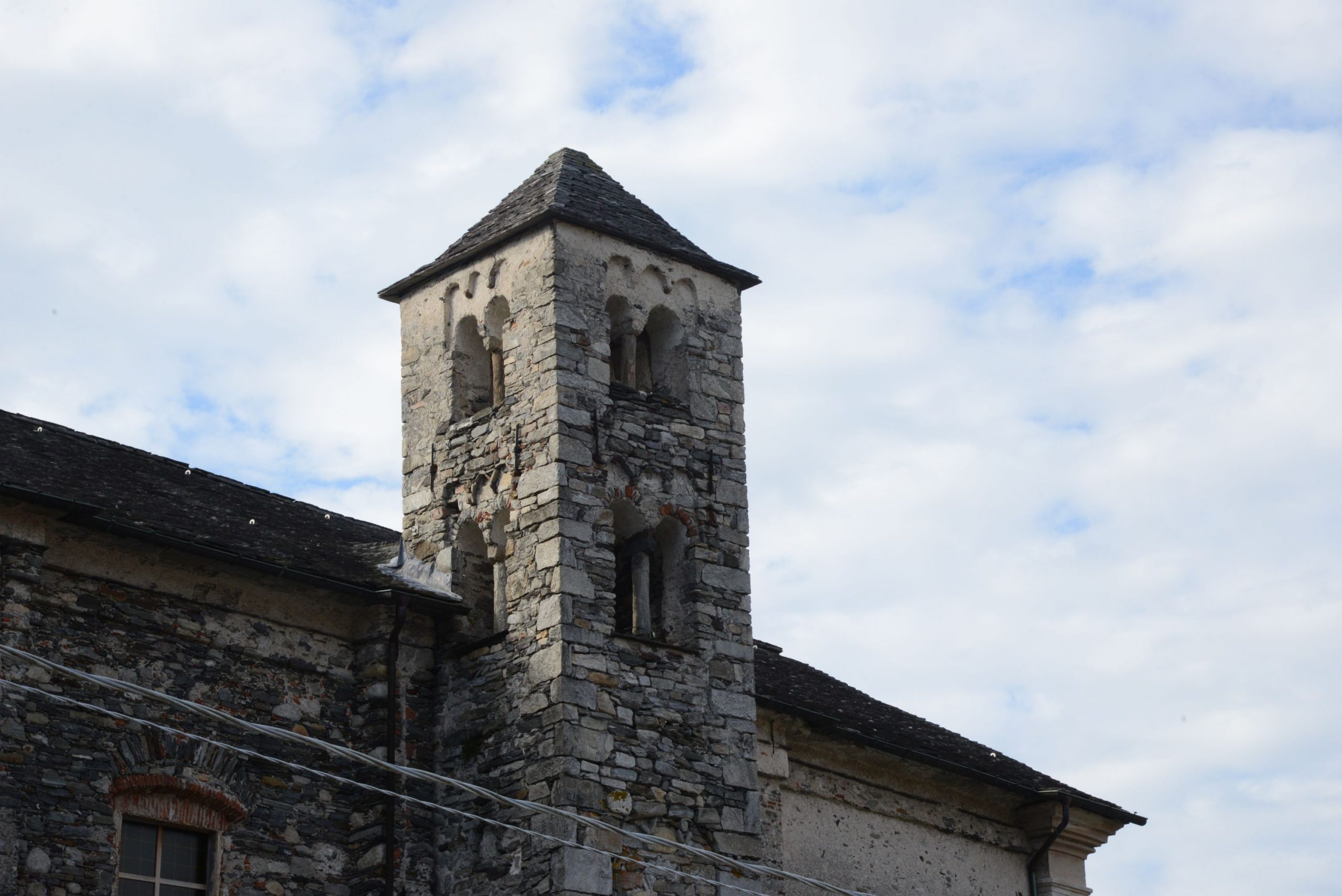 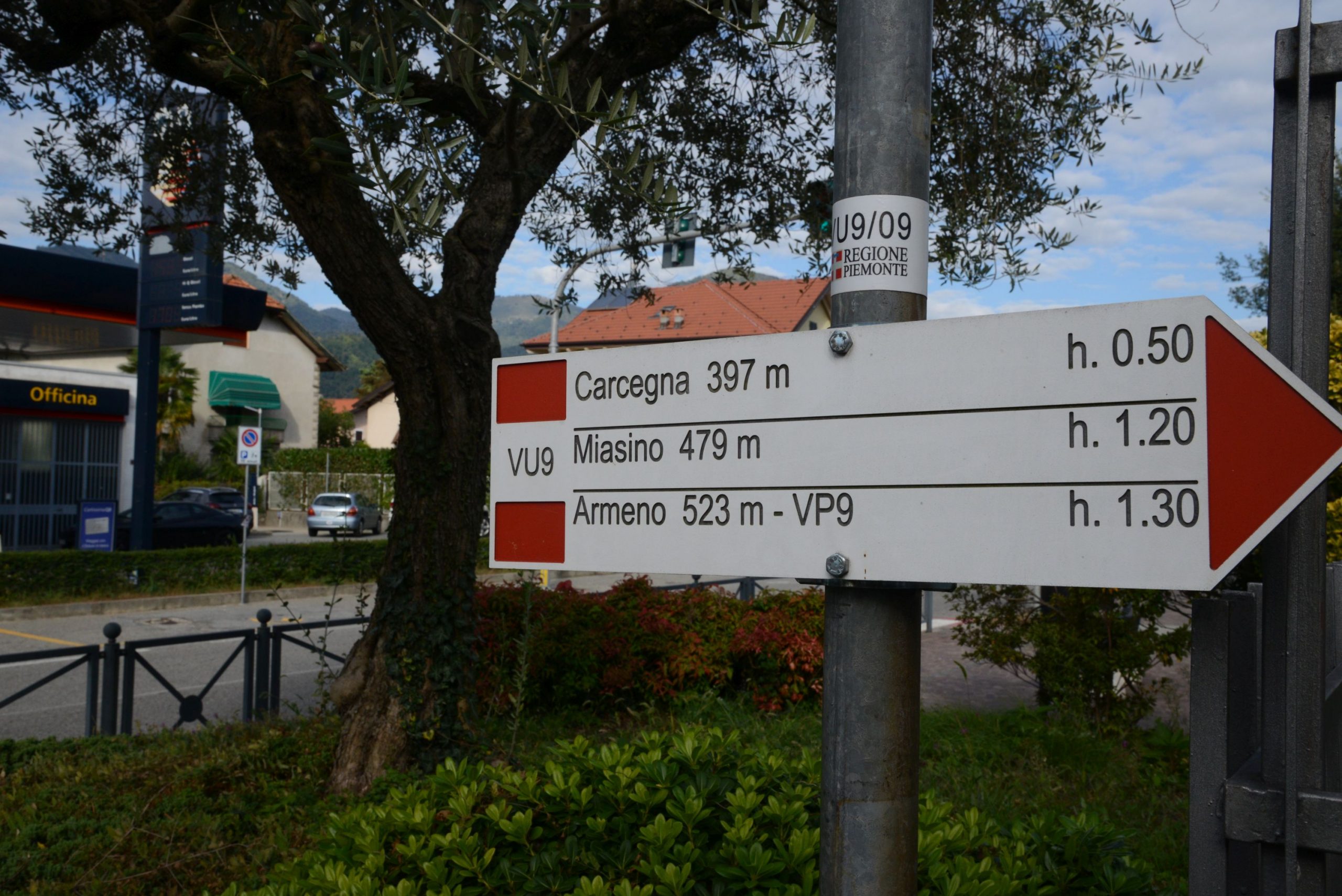 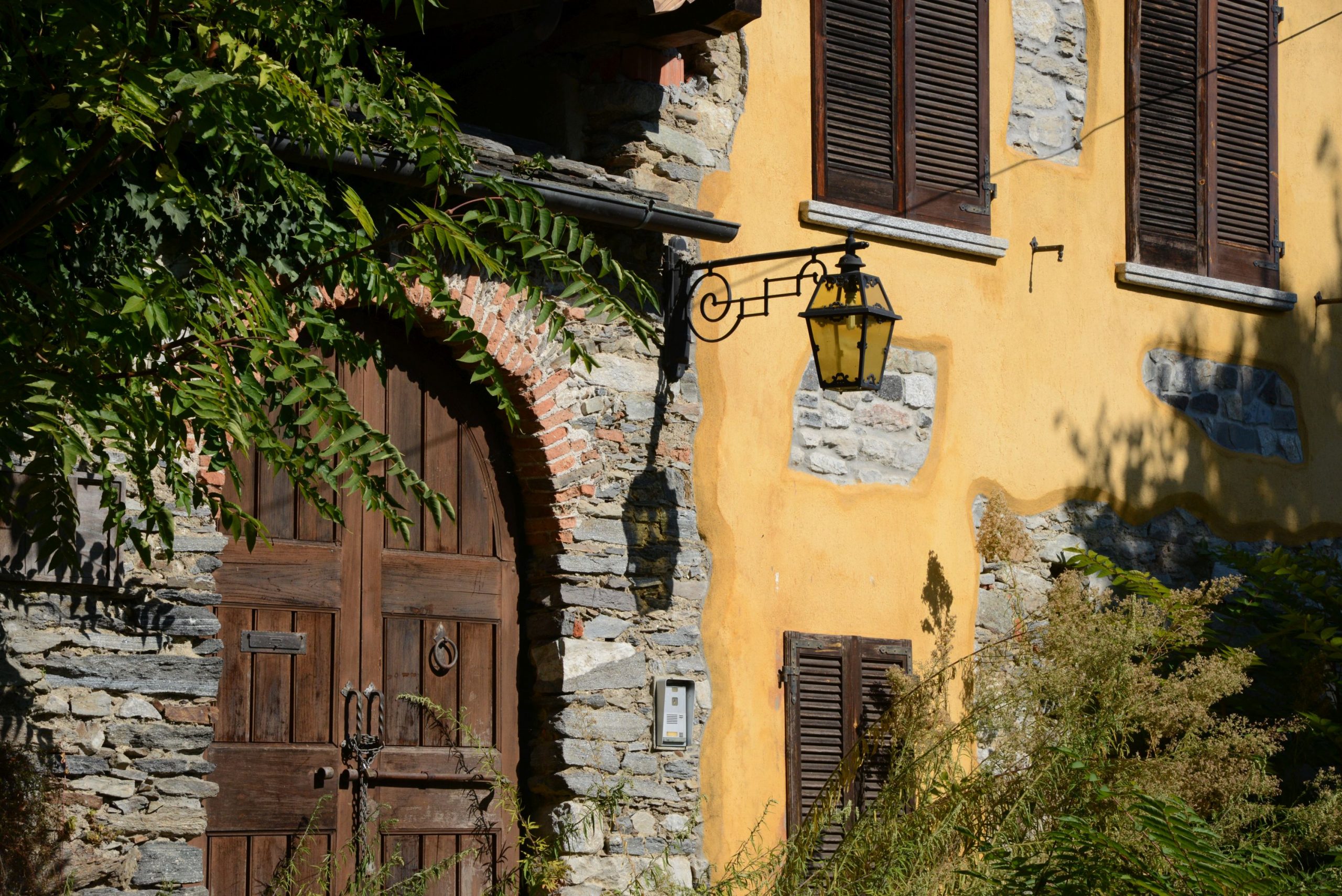 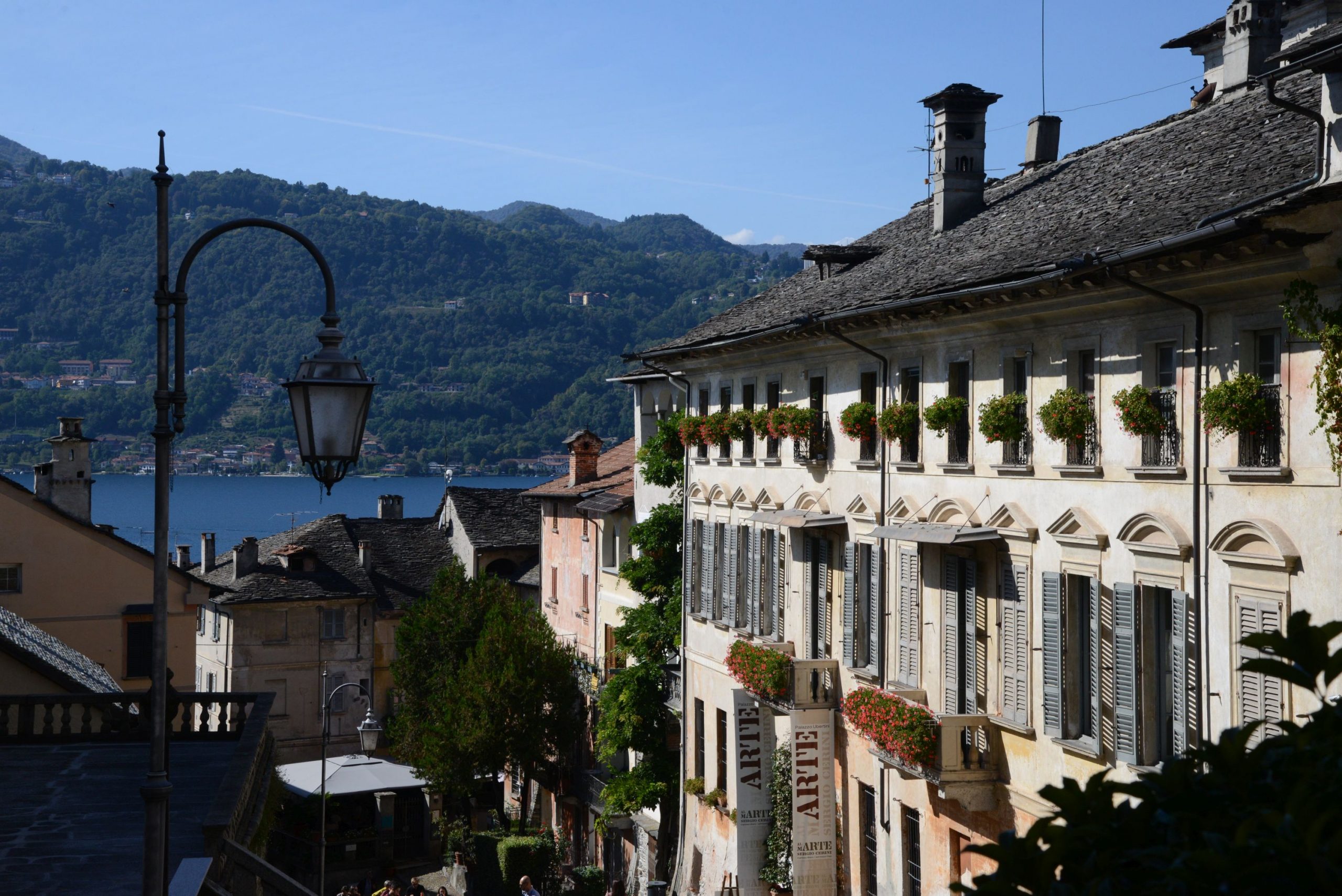 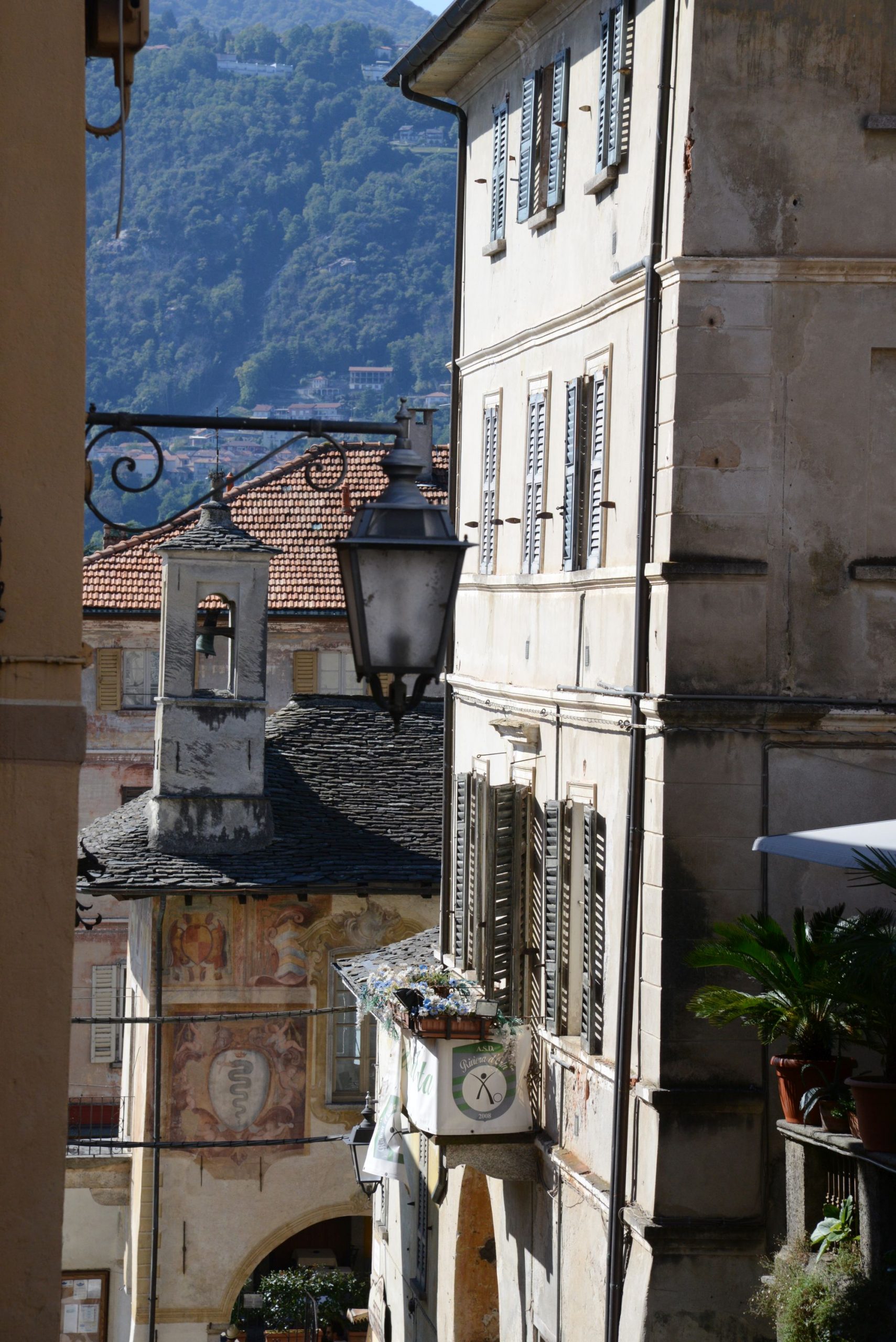 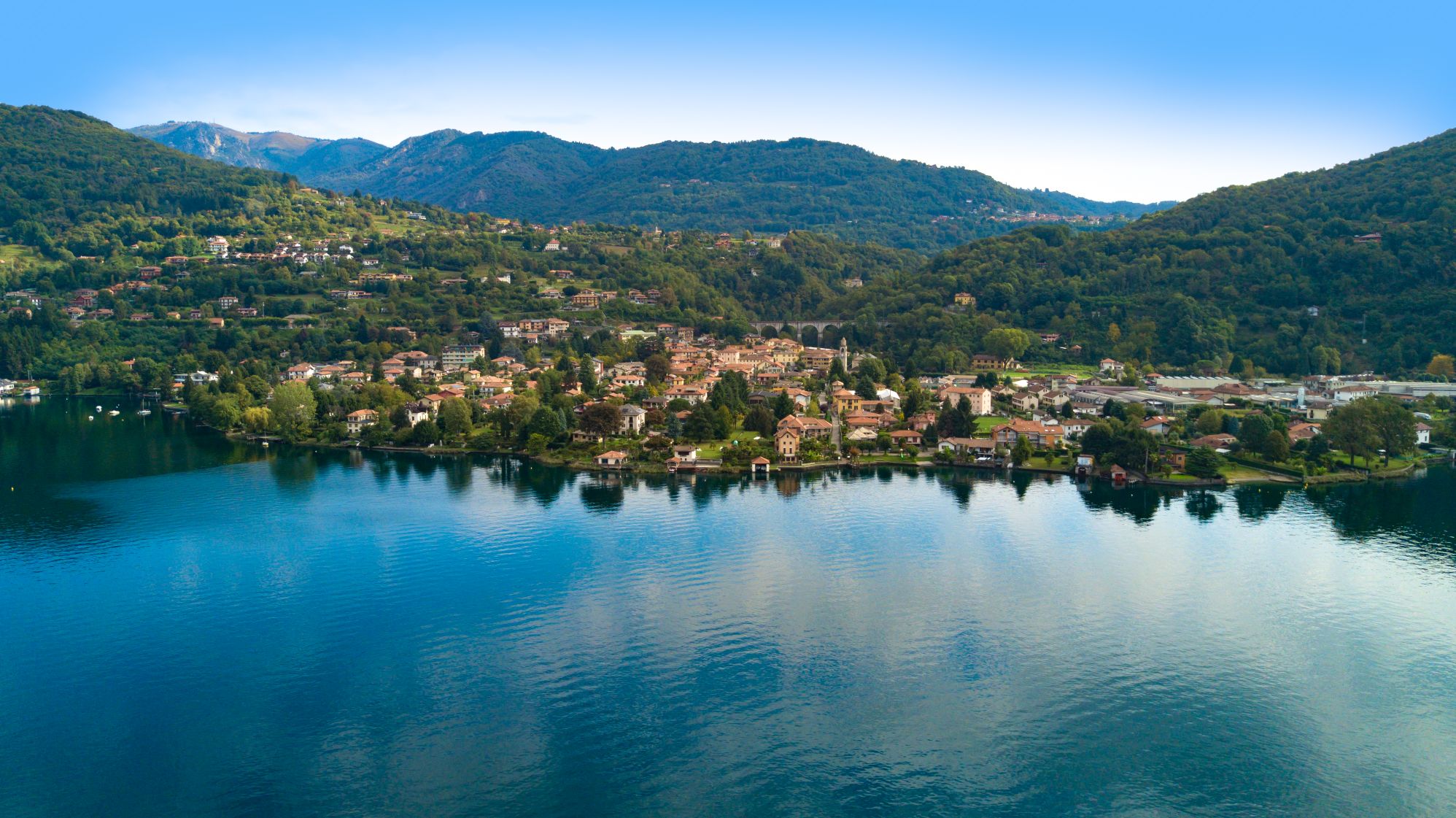