LAGO MAGGIORE: THE “VIA DELLE GENTI” ROUTE FROM CANNOBIO TO CANNERO RIVIERA

A linear route that starts in Cannobio and leads through green forests and picturesque villages along the ancient cobblestone roads once travelled every day. The return trip is on a mini-cruise boat.

From either the car park or the landing station, you are very close to the Sanctuary of Cannobio, which is certainly worth a visit.

In 1522, the family home of Tommaso Zaccheo was located on this site, and in this home there was a small painting on parchment. The painting was of Cristo in Pietà (Christ as the Suffering Redeemer) and in that year, it began to bleed. The first chapel was created in the upper rooms of that house, where St Charles Borromeo celebrated his last mass. It was St. Charles himself who asked for the construction of the Sanctuary, built between 1575 and 1614.

A short staircase leads from the Sanctuary down to the lakeside promenade, full of coffee shops and restaurants, a stone’s throw from the landing station (water fountain). Hikers can go along the wide, pleasant lakeside promenade of Piazza Indipendenza and then take Via Marconi uphill (signs for “Centro Storico”). At the crossroads with Via Umberto I, there is a fountain and frescoes under the left portico of the 16th century Palazzo Pironi. Turning right on Via Umberto I, which is still a pleasant pedestrian street lined with shops and restaurants, hikers will cross a street open to traffic and arrive at the beautiful Palazzo Parasio, built in 1291 (water fountain). Behind this building stands the Romanesque bell tower of San Vittore, at the base of which is the Tourist Office. Continue straight along Via Antonio Giovanola, a road that is open to traffic but not very busy.

Turn left into the narrow cobblestone street Via G. M. Giovanola, which passes near a large square wash-house. After crossing an asphalt road, go straight on for a few more steps and you will come to a fork. Take the uphill road on the right (white signs for “Casali Bagnara” and “Casali Roccolo”, red/white marks) until you reach a new intersection with signs indicating this trail. Now, hikers will turn left (red/white sign for “Cannero” and yellow sign for “Via delle Genti”). The asphalt road becomes narrow and climbs steeply uphill to an open space that serves as a small parking lot. From here, it becomes a path and then turns into a beautiful cobblestone road that continues to climb rather decisively beyond an old votive stone pylon. The road passes close to the fences of a few houses, and then finally becomes more gradual before it enters into a beautiful forest of chestnut trees. The trail continues to climb progressively, but at times, the tree branches open up to reveal a view of Cannobio. Amid oaks and chestnut trees, hikers will come to a larger and more regular cobblestone pavement that should be followed to the right, uphill. This road leads to the houses of the village, Solivo (water fountain). When you reach an asphalt road, take it to the right, always uphill (white sign for “Viggione”). Follow the asphalt for about 250 meters and take the cobblestone road on the left (sign for “Cannero” and yellow sign for “Via delle Genti”). This road joins with a wider cobblestone path, continuing to the left uphill steadily and gradually until it reaches Molineggi. A tiny church is the first building you will see of this village, and afterwards a large mill. The town is dotted with many metal sculptures made mostly from old agricultural tools. After crossing a lovely stone bridge, you enter a beautiful stretch of the trail, delimited on one side by a wooden handrail and on the other by interesting rocks through which magical-looking chestnut trees have grown over time.

A little further on, hikers will reach the maximum altitude of the entire route and leave the dirt road for the path on the left, which finally goes downhill (sign for “Cannero”). Descending amid the chestnut trees in a clear and decisive way, the path crosses a picturesque stream with rocks and waterfalls. The very steep descent leads you to the houses of Carmine Inferiore. Do not enter the town, but instead go to the right (sign for “Cannero”) along a gradual stretch that crosses several small streams. A staircase takes you up a bit in altitude and brings you closer to Carmine Superiore and its Sanctuary.

The village, dating back to the year 1000, was used as a stronghold: the population would take refuge there in case of danger. Little by little, it became inhabited, and the Church of San Gottardo was built during the 14th century. Inside, it houses 15th and 16th century frescoes which can be seen from the window, but if you make a small donation, you can turn on the inside lights to see it. This artwork is definitely worth seeing! During the 17th century, the village was hit by the plague and the frescoes were covered with lime to disinfect the church, which was used as a “lazaretto”, a quarantine station. They were uncovered again during the 1932 restoration.

The place is magnificent, suspended on the rock and with a superb view from the terrace that extends next to the church. Now, hikers have to cross the village (water fountain) through the narrow stone alleys, following the round red/white marks but paying attention to the signs because you have to keep to the left (signs for “Cannero”). When you leave the village, the road will go downhill initially, but then you will encounter alternating stretches of uphill and downhill road, always immersed in the thick forest. At times, you will see beautiful stone ruins surrounded by vegetation. The chestnut trees here are very beautiful and evocative: it is easy to imagine exciting stories about witches, elves, gnomes and strange fantastic animals! Gradually, you’ll reach a more open and terraced area from which you can enjoy the view of the lake and the Castles of Cannero.

The castles look like ships floating on the water. Built between the 13th and 14th centuries, they were known with the name “Malpaga” because they had been built at the expense of the local population. The five Mazzardi brothers, called the Mazzarditi, took refuge in these castles and dominated the surrounding areas with an iron fist. Finally, the Duke of Milan Filippo Maria Visconti put an end to their cruelty and raids. His army besieged the castles in 1414 and then razed them to the ground. The Borromeo family later bought these islands and built Rocca Vitaliana in 1519. They used the property to control traffic with nearby Switzerland. These constructions were abandoned over time, but they are still owned by the Borromeo family. They are not open to visitors.

Hikers must cross the small village of Cheggio (281 m) following the rudimentary signs for “Cannero” and then descend to the state road and cross it carefully.

WARNING: this crossing is DANGEROUS! Use the pedestrian stripes that are slightly to the right, and BE VERY CAREFUL because the cars travel fast and can take you by surprise from behind the curve.
After crossing, immediately take the pedestrian road on the left that goes downhill towards Cannero Riviera, then turn left at a sign for “Cannobio” (backwards). You will arrive at the small harbour, lakeside promenade and landing station from which you can take the boat back.

An excursion through charming woods that culminates with the village of Carmine Superiore, a real trip back in time. Not suitable for pushchairs. 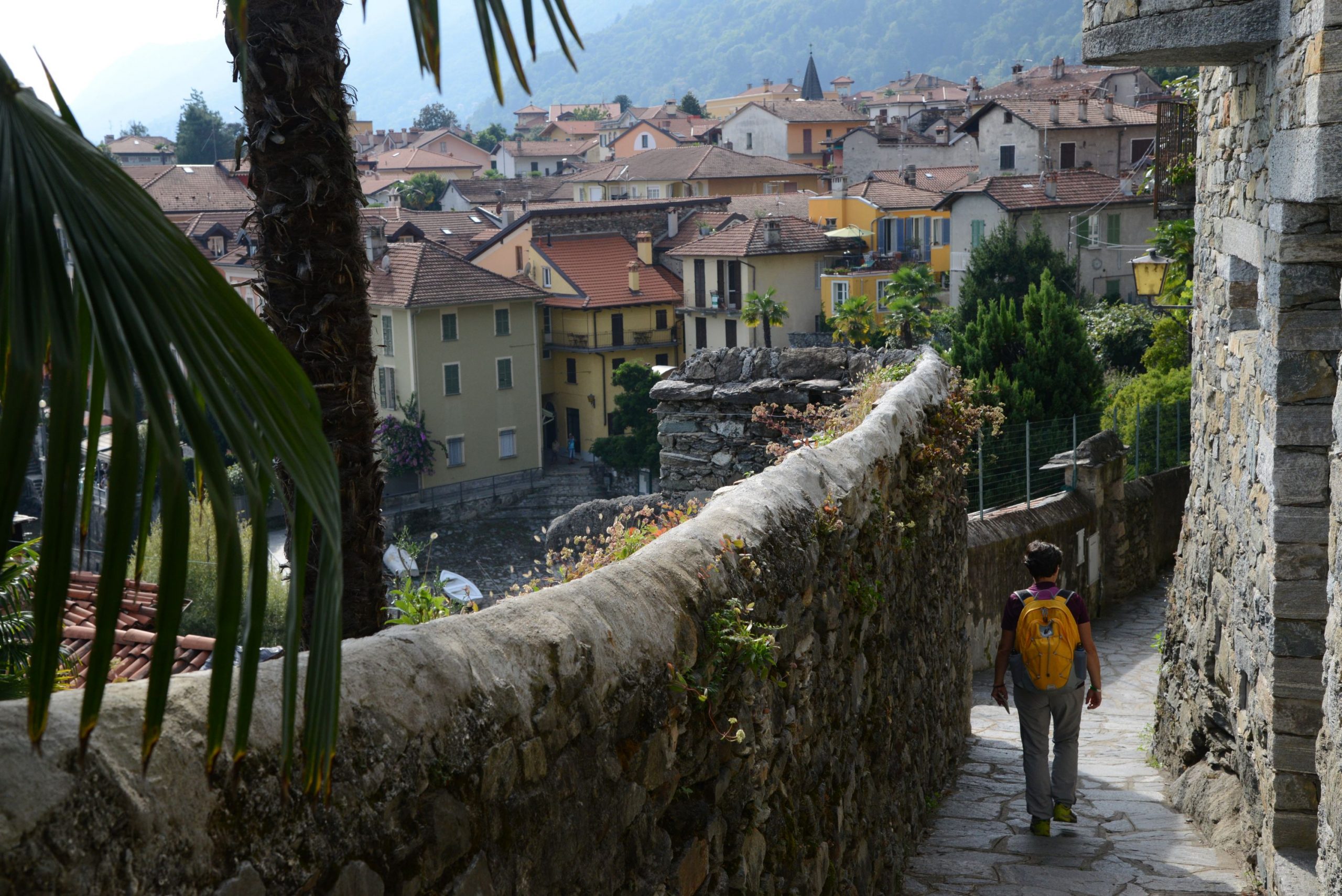 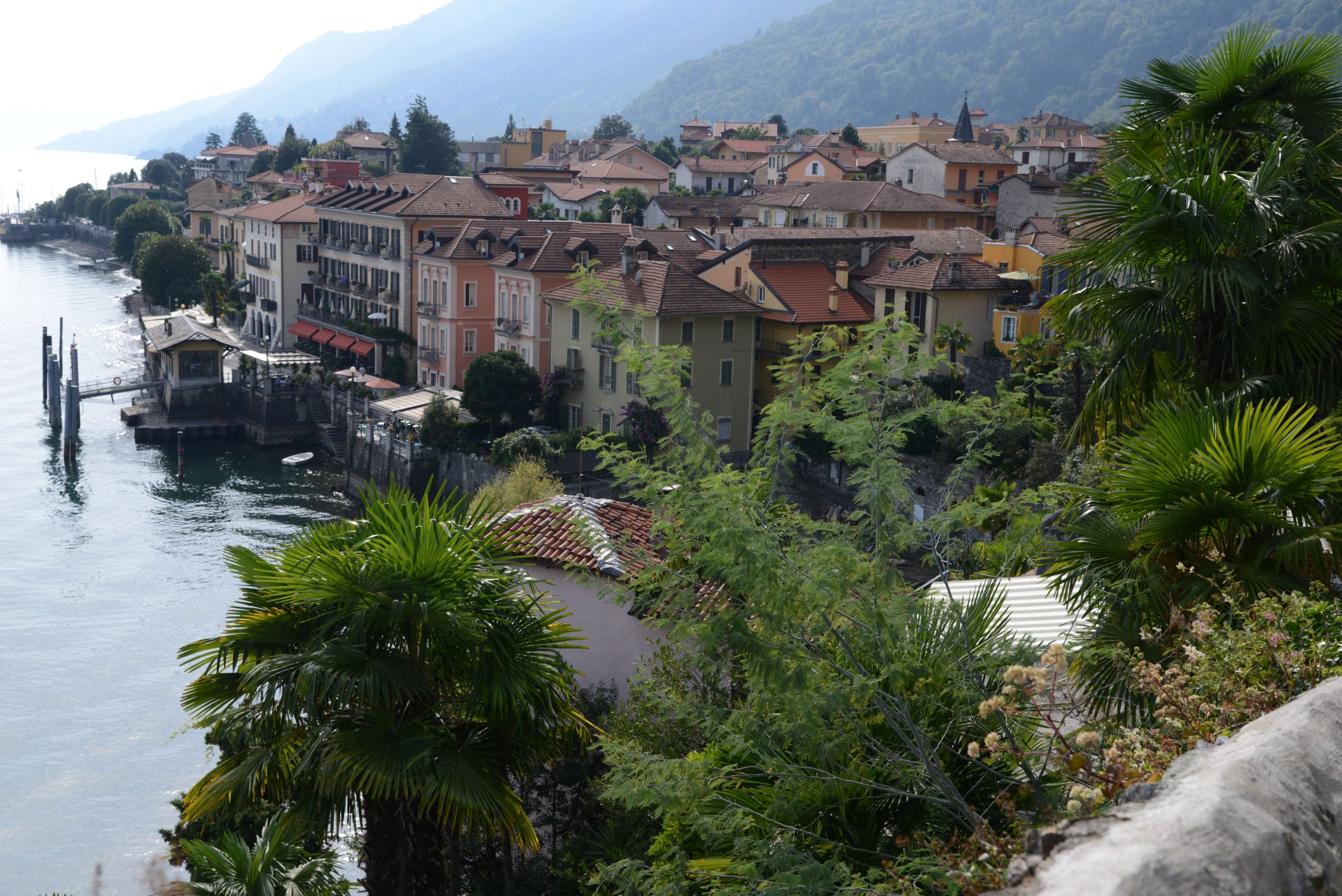 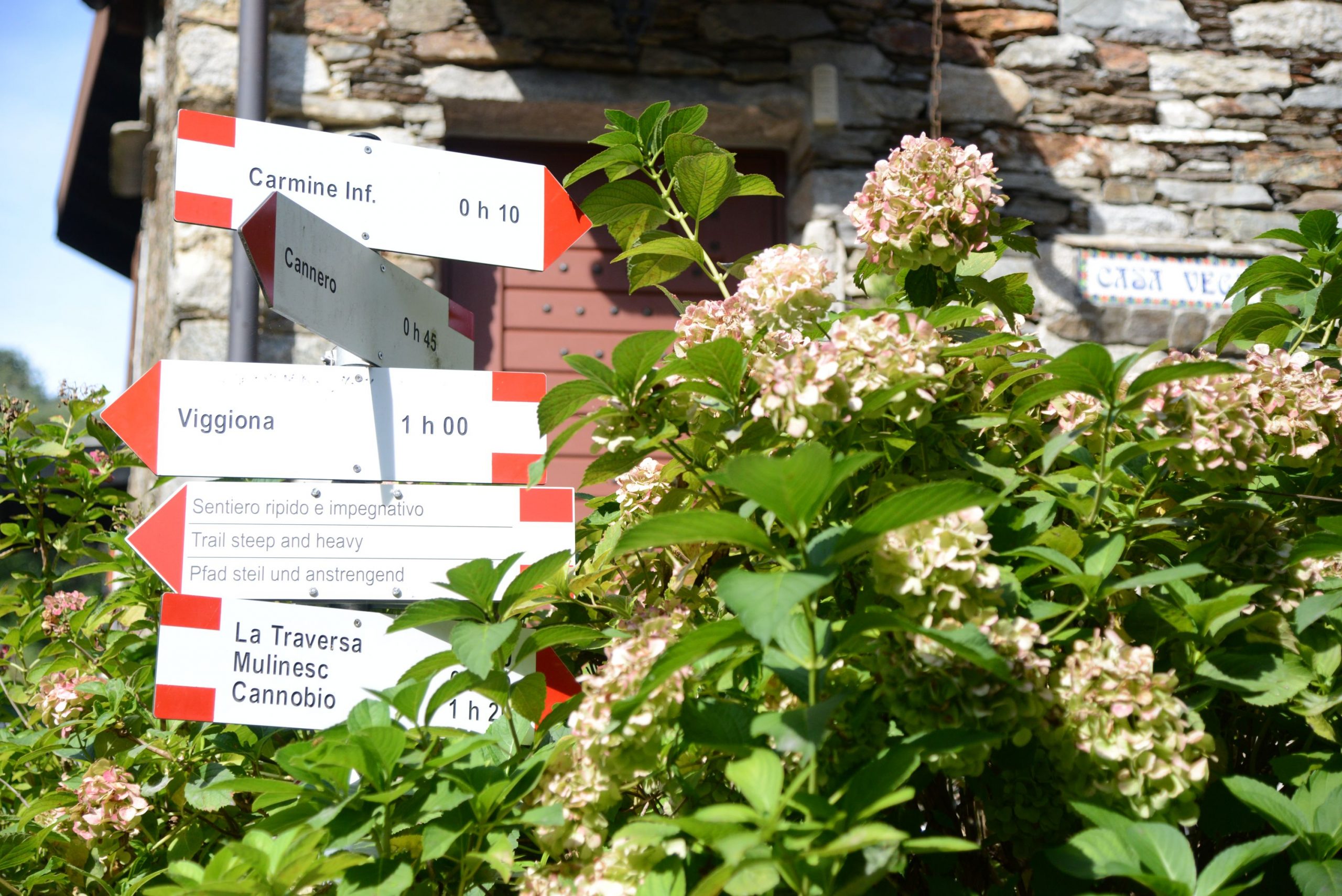 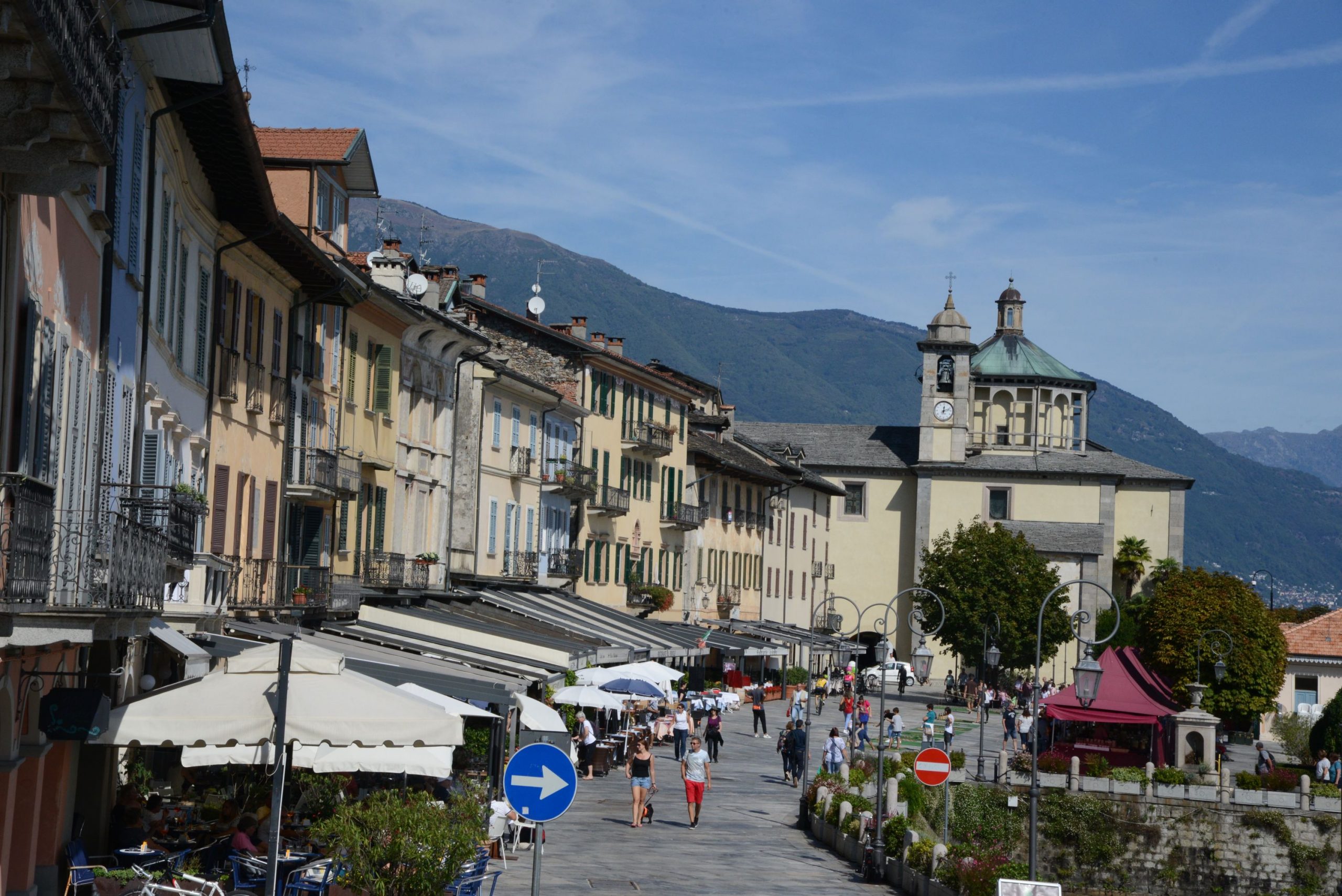 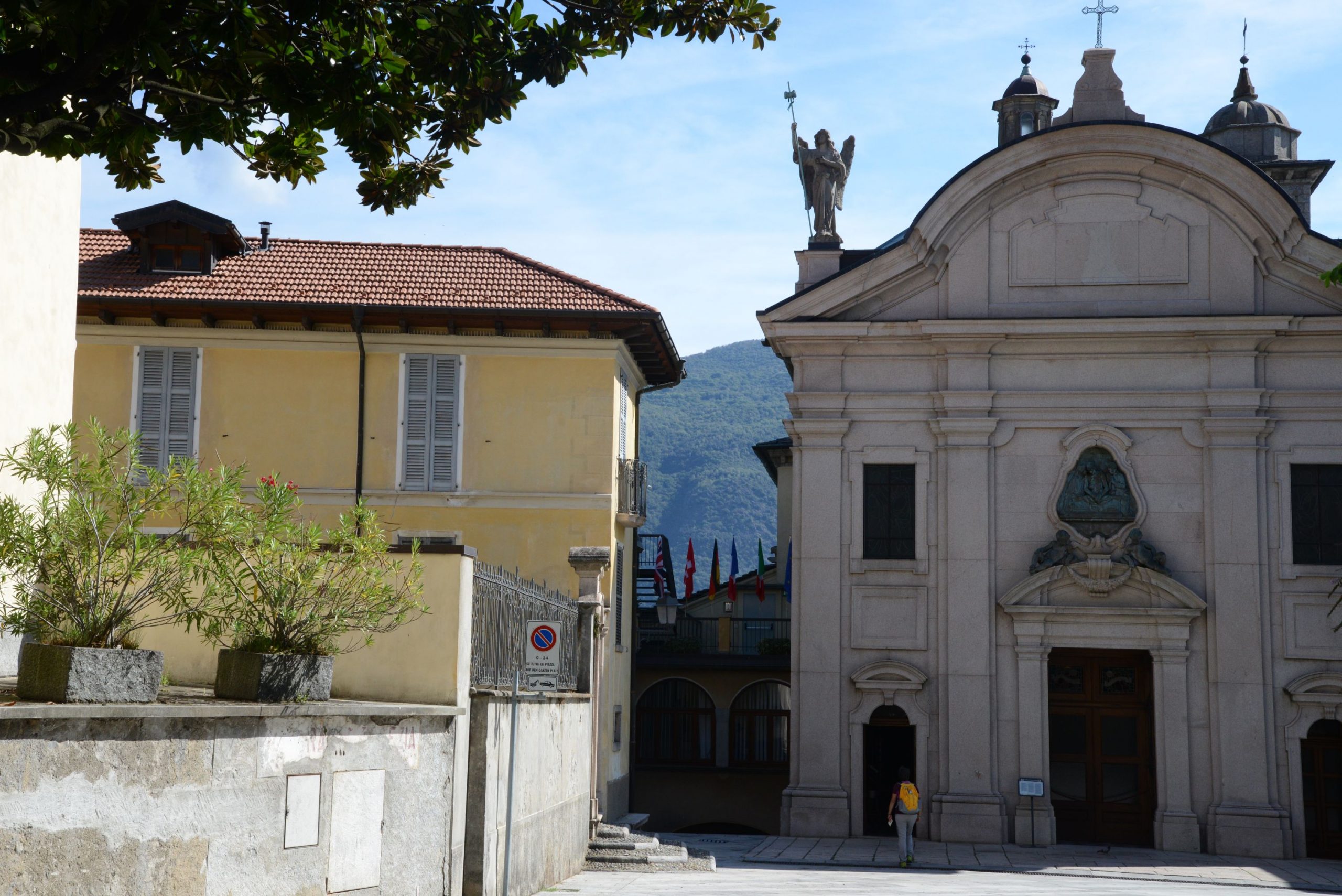 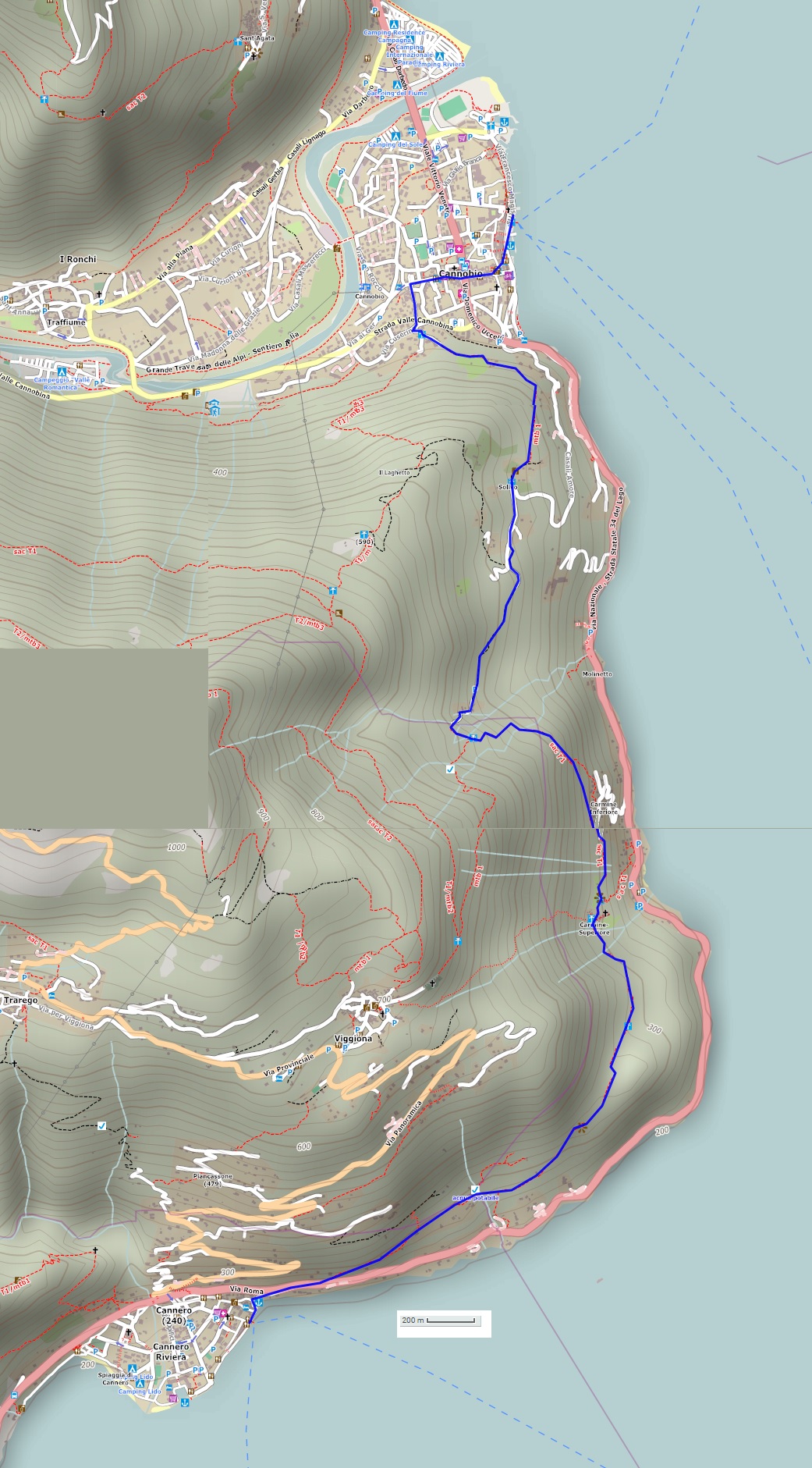