Along the crest of San Pietro

THE VIA FERRATA OF THE “MORO” PASS: A HIGH ALTITUDE ITINERARY

The Via Ferrata of the Guide di Macugnaga is a recent one. It was built at a high altitude, and it runs from the Monte Moro Pass along the San Pietro mountain ridge. It is a mountain ridge Ferrata, aerial and short. It is not particularly challenging from a technical point of view, even if it is very exposed and located at a high altitude.

The itinerary’s starting location is the mountain station upstream of the cable railway that connects Staffa (Verbania province) to the Monte Moro Pass. To reach Staffa, the most common route is through the A26 motorway up to Gravellona Toce on the western side of Lake Maggiore. Proceed passing through Anzola d’Ossola and then turn and take former state road SS549 now SR549 Macugnaga that climbs up the Valley until it reaches the village of Staffa where you will find a parking lot near the cable railway.

From the station upstream of the cable railway, head down towards the Oberto Maroli mountain hut. From the hut, continue towards the San Pietro mountain ridge. You will reach a ski lift. Follow the sign to go around the peak from the left bank. Follow the tracks under the rock until reaching the starting point of the via Ferrata (30 minutes travel from the cable railway station).

The via Ferrata of the Guide di Macugnaga starts immediately with a vertical wall featuring plenty of supports for the feet. When you reach the top of this wall, turn right, and follow the ridge. Initially, there is a short climbing-back stretch, exposed yet not difficult. Beyond this stretch, the mountain ridge ascent begins with short climbs on rocks. The first of these rocks is a slight overhang. Then you reach an aerial and thrilling suspended monkey bridge. After crossing the bridge, you must cover a traverse to the right and climb a short wall. Continue along the path marked by the equipment, climbing up for a short stretch, then start the descent. The trail is equipped; however, this stretch is less challenging and reaches the end of the via Ferrata (1h from the starting point).

At this point, you can head back to the cable railway (20 minutes from the end of the via Ferrata – 2h total).

An alternative is to continue in the direction of Joderhorn, a rocky prominence not far from the via Ferrata. From the end of the via Ferrata, go left following the stone figurines that will guide you on the steep climb up to the summit ridge (3036 m). From here, you can descend to the summit cross, where the signature book is located. Follow the trail that led you to the summit and descend to the Monte Moro Pass through a short, equipped stretch and head to the cable railway (45 minutes from Joderhorn).

From the end of the via Ferrata, follow the trail that leads to the cable railway in approximately 20 minutes (2h total).

This short via Ferrata is a classic ridge Ferrata where exposure plays a significant role. The technical difficulties are low. The height difference is not significant and is mostly found at the first vertical wall. Subsequently, an aerial ridge is crossed through a bridge that makes it even more exposed. Always keep in mind that the location is at a high altitude, approximately 3000 m a.s.l. and, thus, pay due attention to the equipment and weather forecast. 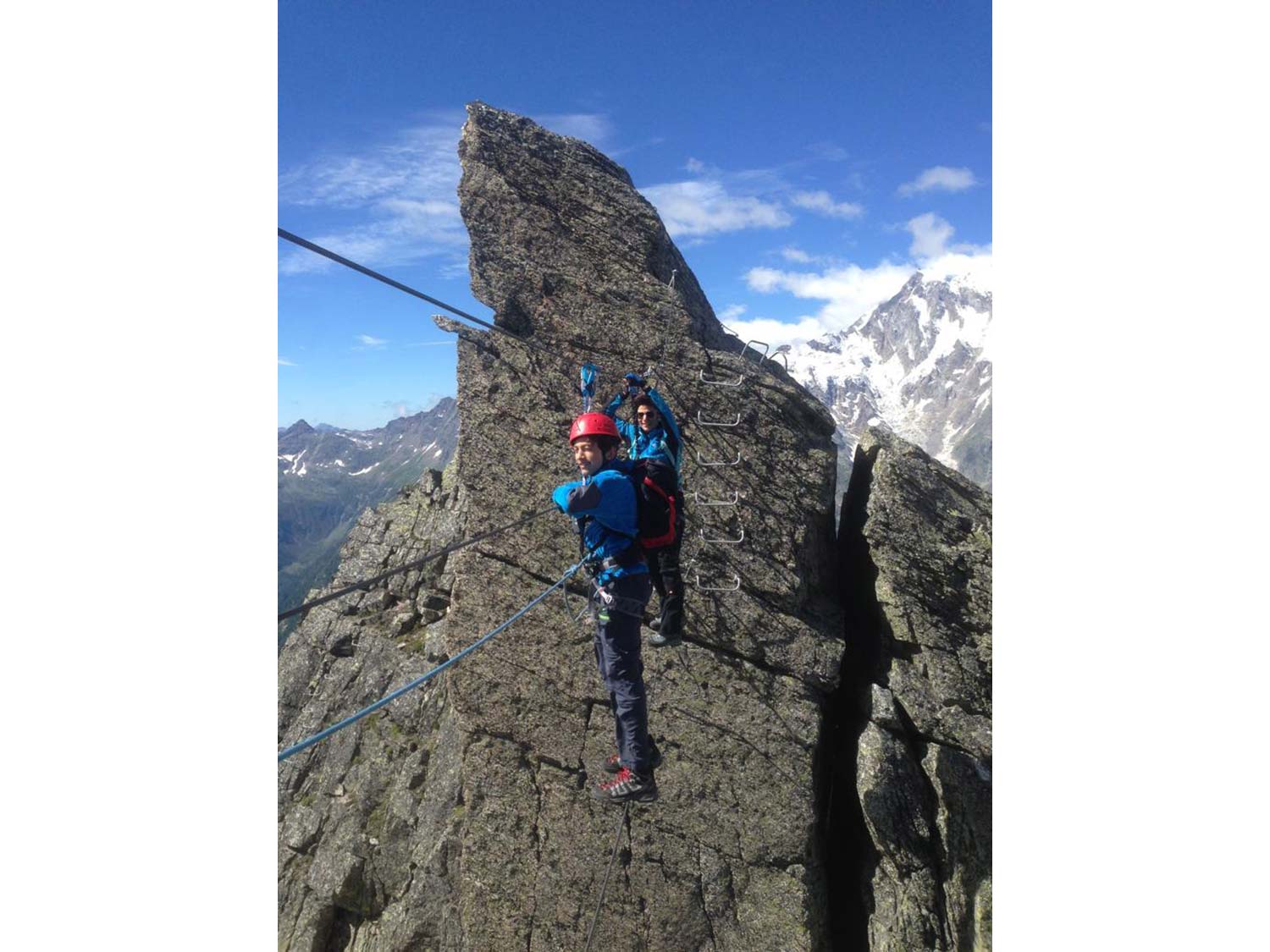 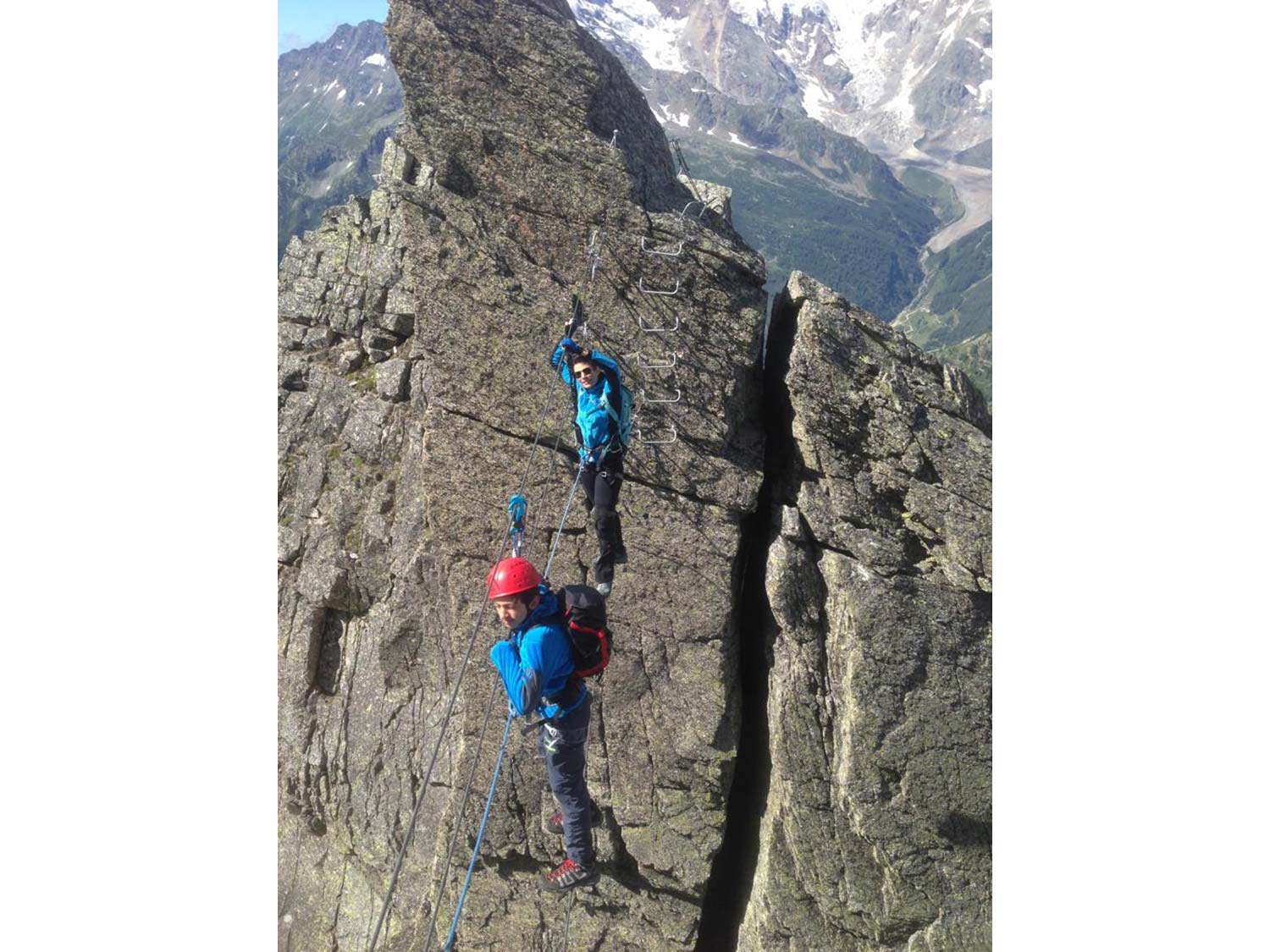 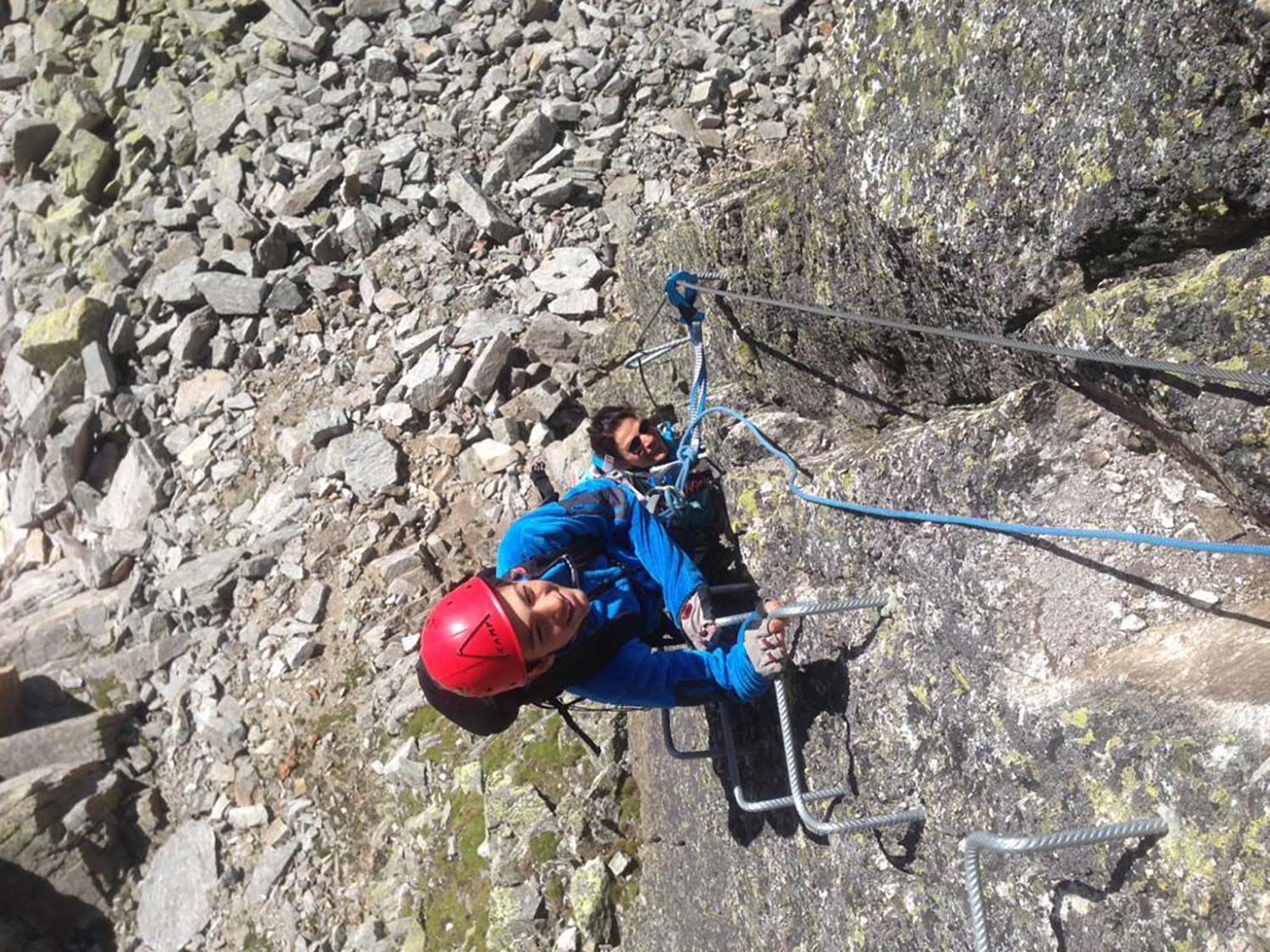 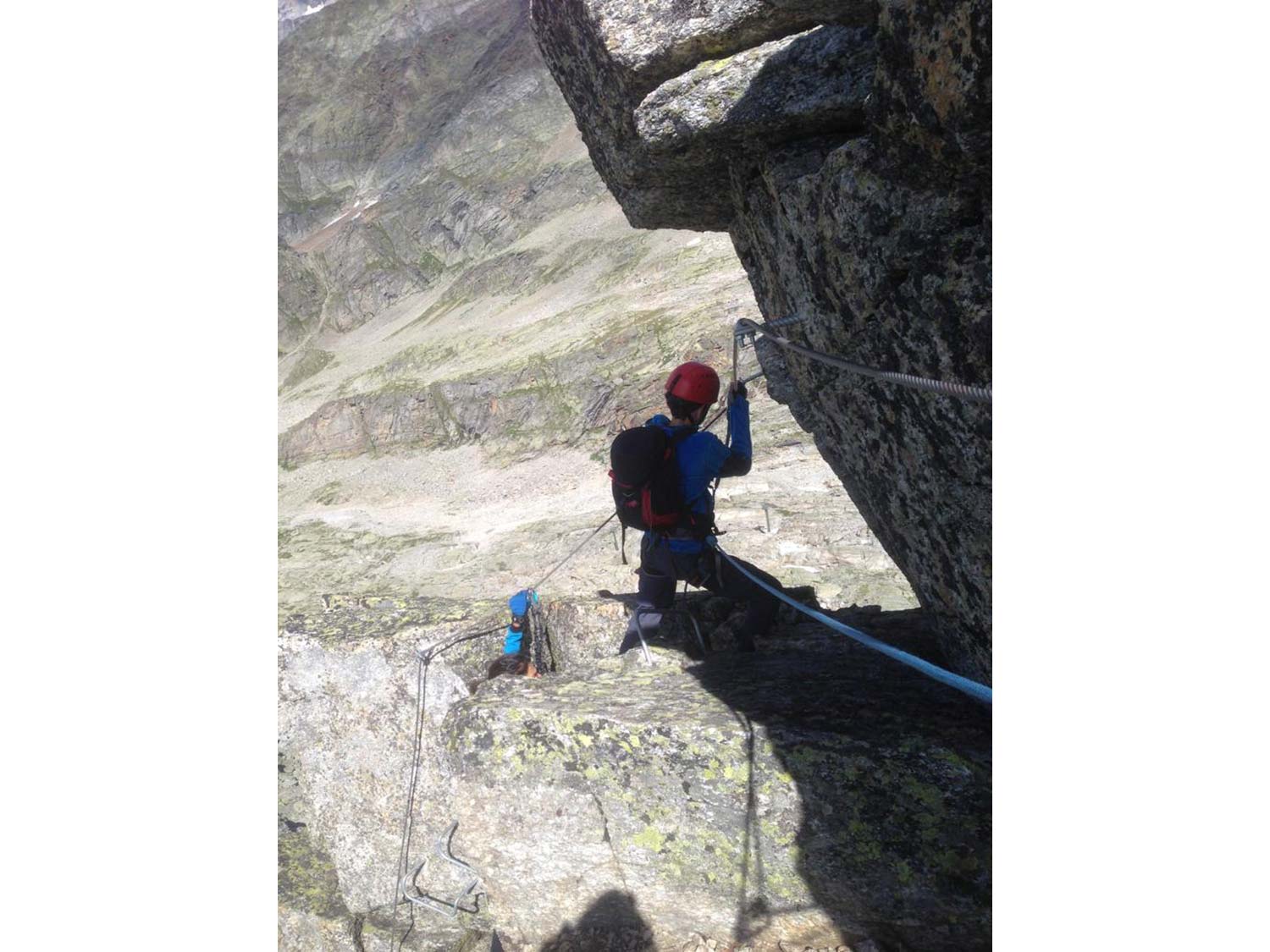 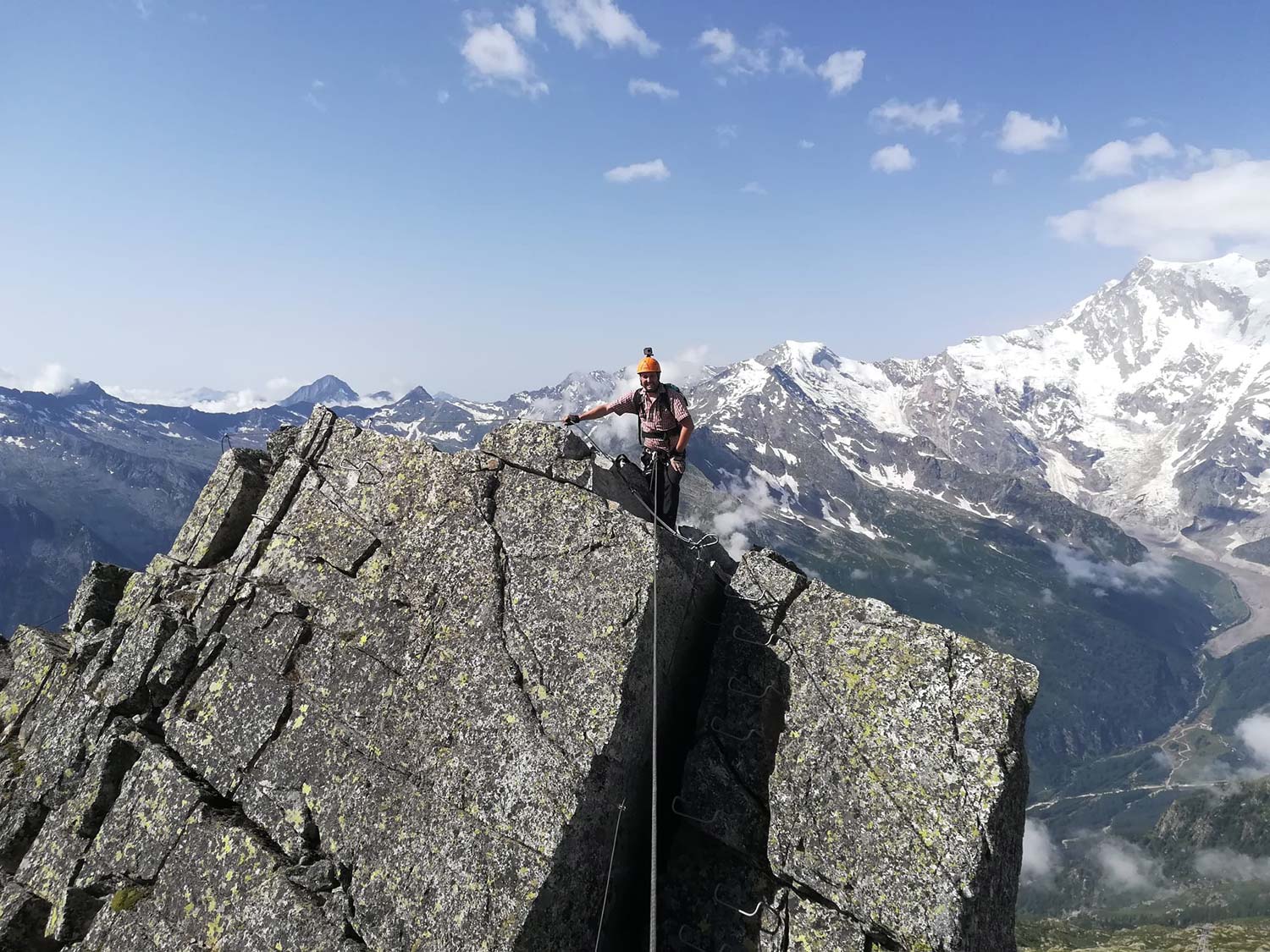 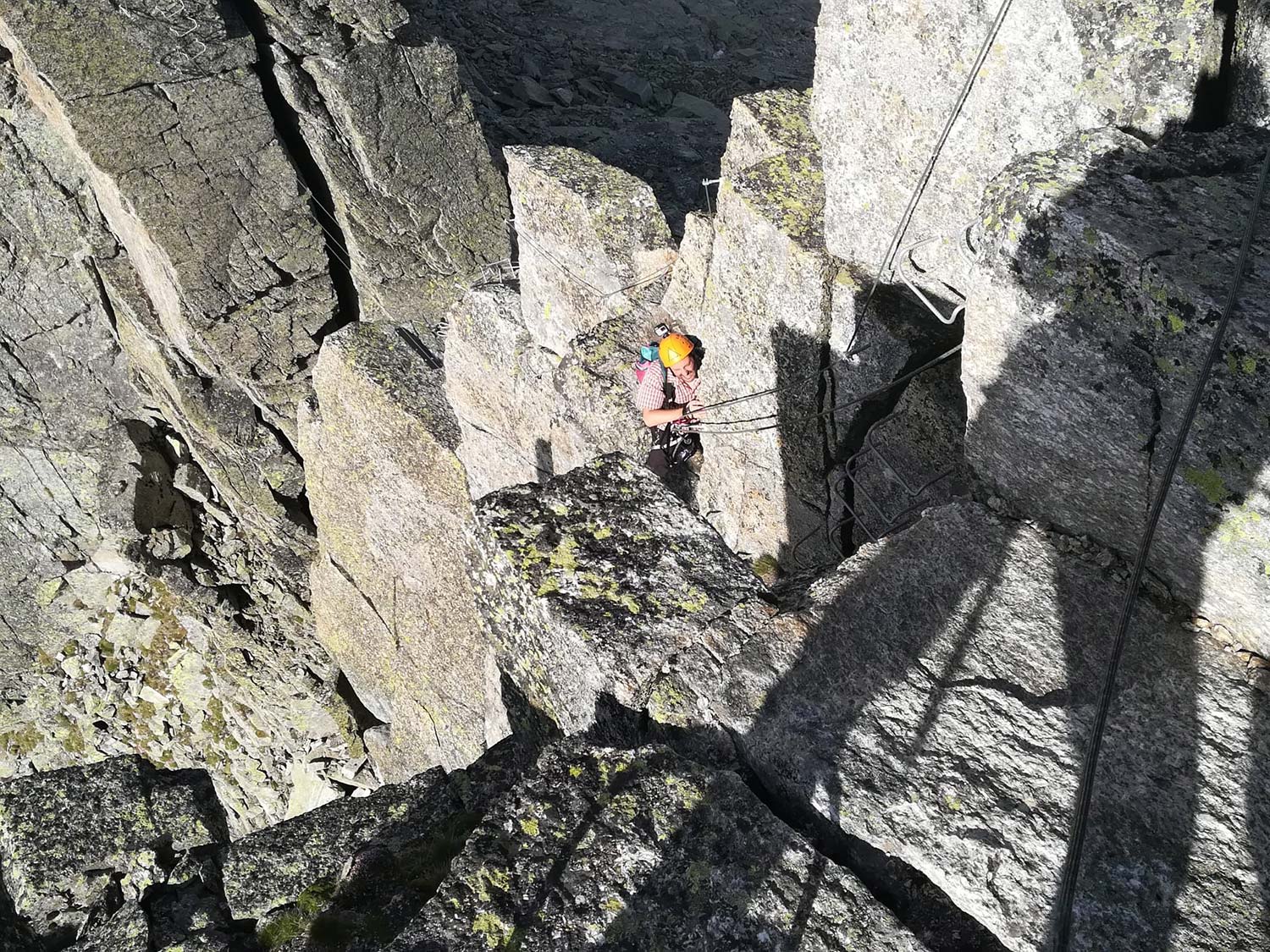 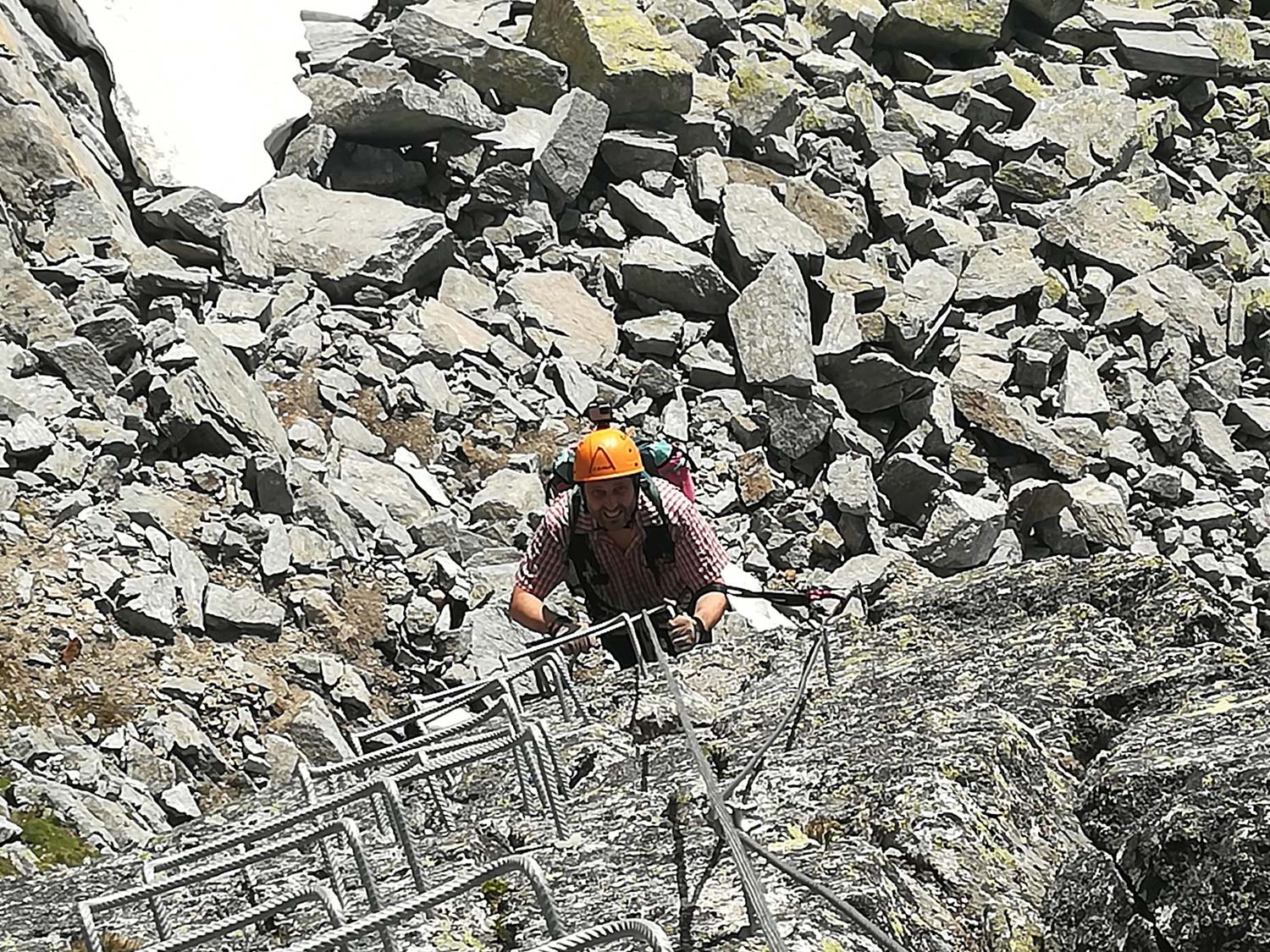 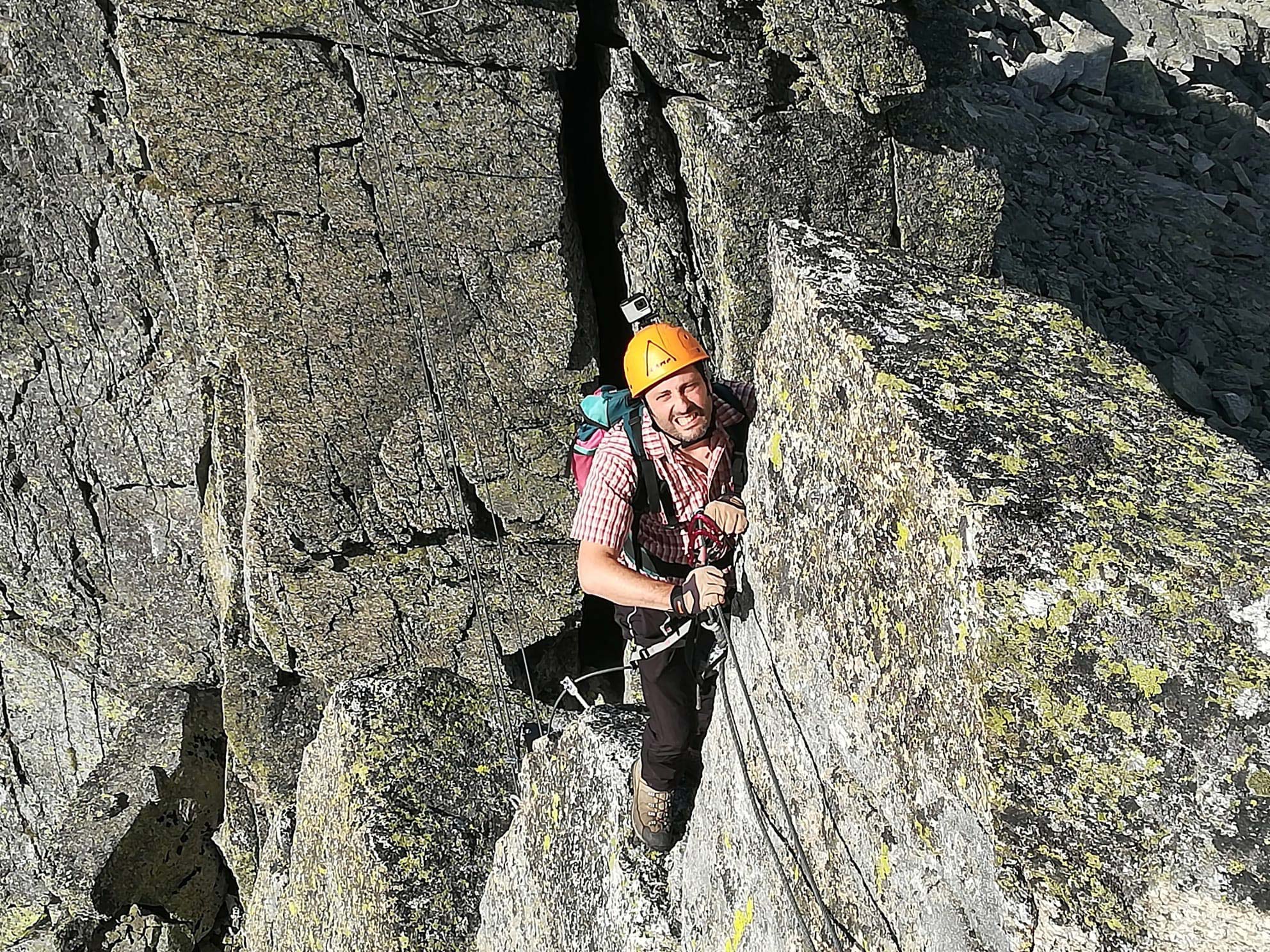 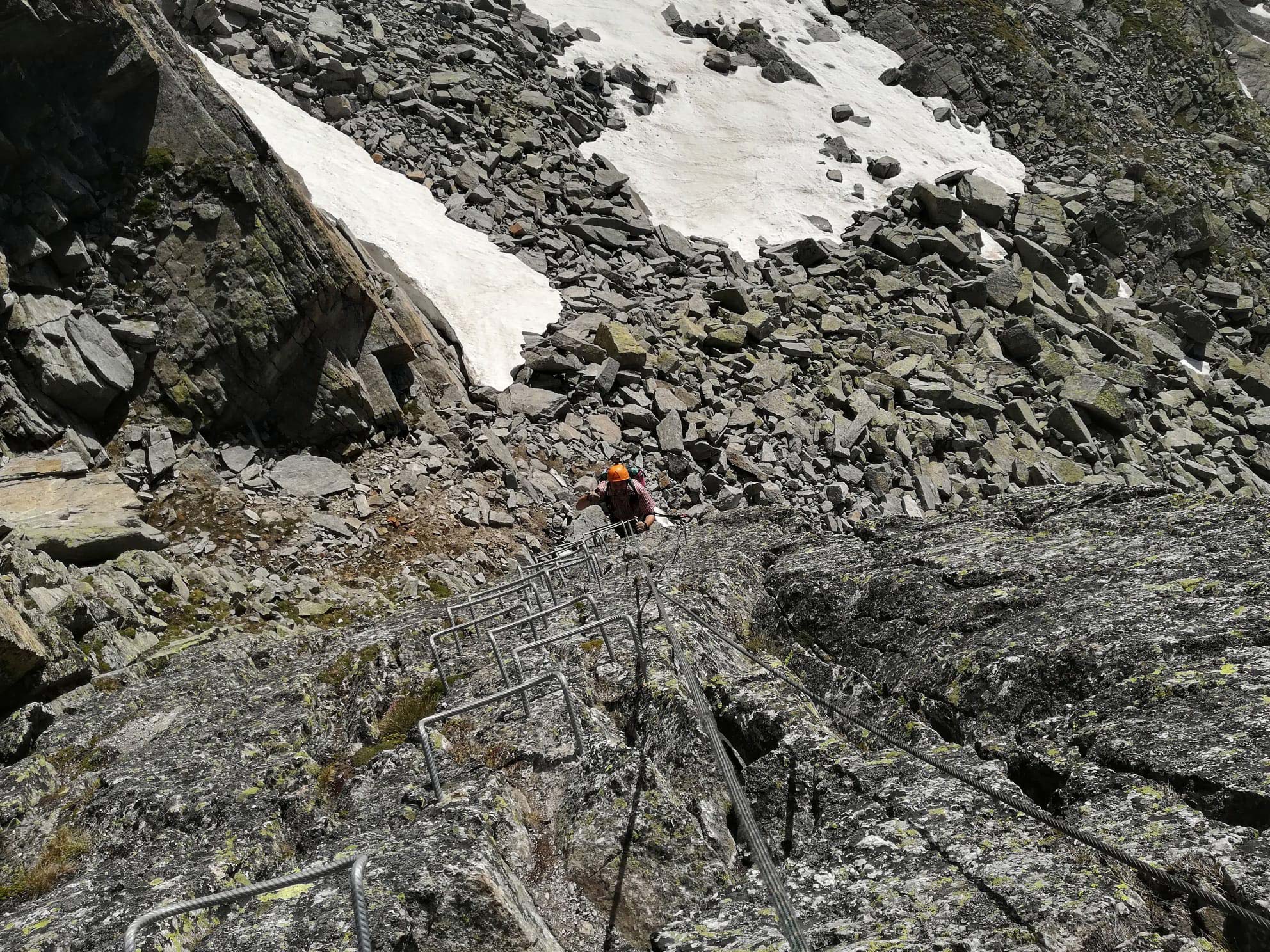 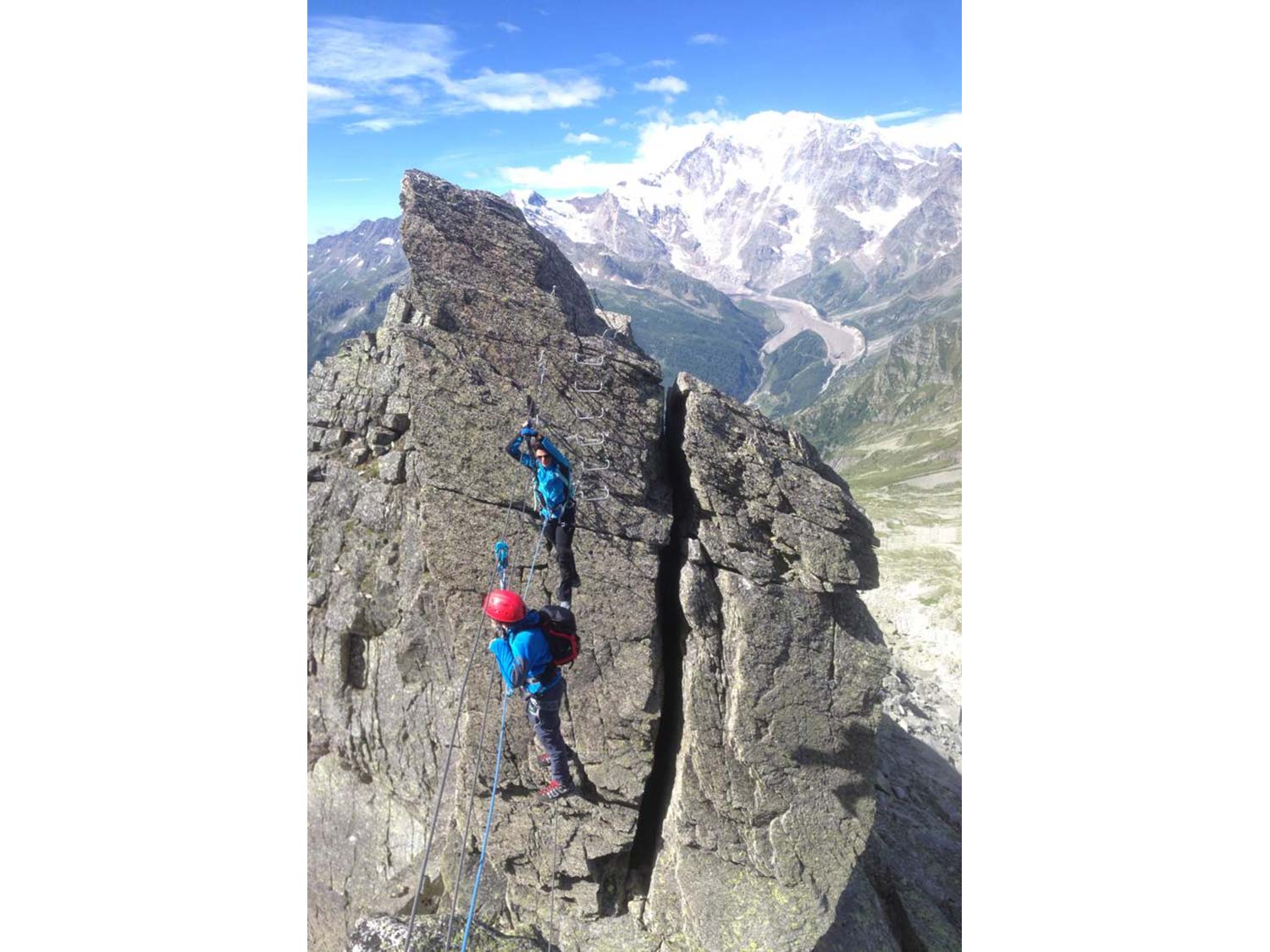